The Nokia 8 has two 13MP camera sensors seating behind Zeiss lens. One sensor shoots in black & white, the other - in color (the latter also has optical image stabilization). At 1.12µm, the pixels aren't the largest, and the f/2.0 aperture isn't the brightest. We've seen Huawei do a great job with a similar setup, so there should be nothing to worry about. Note that the second camera will help with bokeh effects, but does not offer zooming capabilities as was the case with the most recent Huawei phones. 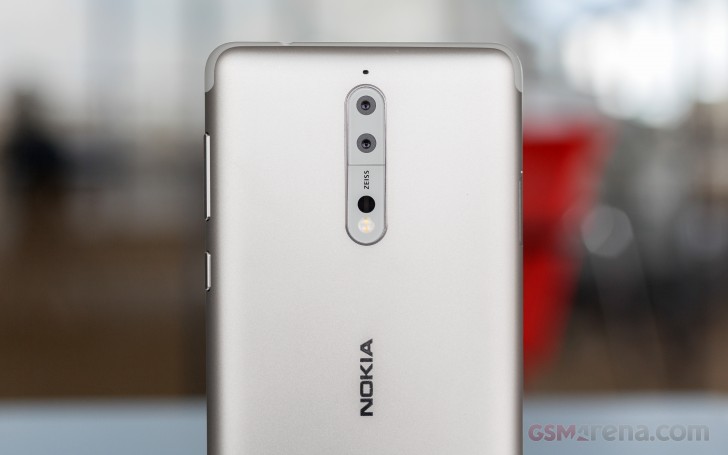 As mentioned earlier, the 13MP selfie camera also has an f/2.0 Zeiss lens and same size pixels too. Treating both (color) cameras as (near) equals has a point - Dual-Sight. This is what HMD calls the feature that combines video from the front and rear cameras in real time, and you can even livestream such picture.

Zeiss might be the big name in the camera business but there's an up-and-comer called OZO. Best known for Nokia's insane 360° VR camera, the team knows a thing or two about sound and the Nokia 8 has benefited from that.

If you've never tried it, it creates a much more realistic sound with clear directionality. You clearly make out where the sources of sound are positioned in the space - in front, behind and to the sides! Note that you need headphones for the best effect, but people don't need a Nokia 8 to hear the effect in the videos you record.

We did say that the Nokia 8 runs mostly unmodified Android, but there's one major exception - Nokia wrote the camera app. And we're glad for it. As Google managed to prove with their own Camera app - sometimes an awesome app can make all the difference between an average and a great photo even on one and the same device and hardware.

The Nokia camera interface is clean and intuitive - on the left you can find a bunch of shortcuts, while the camera and video shutters are on the right.

Just next to the shutter there us a small key for the available modes - Beautify, Panorama, Auto, Bokeh, and Manual. Unfortunately, you can't adjust shutter speed in Manual mode.

There is HDR auto option on the left bar, the switch for front/rear/front+rear camera is also there, as is the toggle for color/mono/color+mono. If you choose to shoot with both main cameras you will get a combined image, which should supposedly improve on detail level and clarity, especially at night, but shooting in this mode is quite slow.

The Nokia 8 should supposedly rely on both laser and phase-detect autofocus, but our unit exhibited some serious focusing issues no matter if it was broad daylight or night time. At least three of every ten camera samples came out out-of-focus and we even had to discard two complete test scenes as there wasn't a single keeper (something that's quite hard to judge while you are on the go). Of course, this could be an issue limited to our test unit in particular or something fixable on a software level with a patch. We'll keep you updated.

The daylight camera samples came out with abundant detail and with vibrant yet true-to-life colors. The sharpening is moderate, the dynamic range is notably wide, and the noise is very low. Those are surely among the best 13MP samples we've had lately.

The monochrome samples are equally impressive, sans the colors, of course. The lack of the color filter lets more light in and allows the B&W camera to shoot at twice as fast shutter speeds while achieving the same exposure. Other benefits of not having a Bayer filter include the higher contrast and dynamic range, and even lower noise levels. Unfortunately, the focus issues plague the monochrome camera, too.

The Nokia 8 turned out a great performer at dusk and night when it comes to taking pictures. The color samples came out true to life, not that noisy, and with enough detail to impress us. The optical stabilization surely helps here, though the bad autofocus got in our way.

Switching to the monochrome camera we were able to get a little bit higher contrast and less noise as the phone shoots on lower ISO setting (400 vs 1000+ in color).

We should have been able to get better low-light images by choosing to shoot with the both main cameras, at least on paper. Stacking images is a familiar approach in lots of smartphones and it works great for the Pixel XL, Huawei P10, among others. Unfortunately, there is no real benefit of this mode on the Nokia 8. We saw no improvement among the samples, but getting info from the two cameras at least helped the autofocus and it does better. Be warned though, shooting such an image and the subsequent postprocessing may take up to 5 seconds, which is a huge bummer - especially having in mind there is a screaming hot chipset inside the phone.