The first official image of the new Nokia 8000 4G has slipped out along with additional details about its design and features. First off, if you were expecting a slide-out keypad cover (a trademark of the original 8000-series), you’d be disappointed.

The new design looks more like an ordinary featurephone, albeit with some premium touches. The sides of the phone, including the keyboard, are curved and the exterior has a “glass-like” design (whatever that means beyond “glossy”).

The 8000 4G will indeed be a KaiOS device, with WhatsApp and Facebook apps. Also, the 4G connection could be shared with other devices through a Wi-Fi hotspot. There will be a dual-SIM version too (using two nano-SIMs). 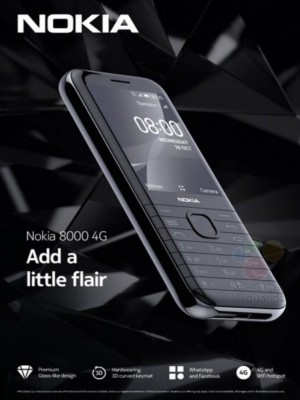 The phone will have a 2.8” LCD (240 x 320 px) and will be powered by the Snapdragon 210 chipset with 512 MB of RAM and 4 GB of internal storage (expandable via microSD). That’s more processing power than we originally expected – the 8110 4G, for example, uses Qualcomm 205 chipset (which has only two Cortex-A7 cores instead of four).

The 1,500 mAh battery will be user-replaceable, unfortunately it will charge over an outdated microUSB port. The 2 MP camera is a bit of a disappointment too, considering this is meant to be a premium device.

Besides the 8000 4G, HMD Global will introduce the Nokia 6300 4G, a reinterpretation of the well-respected mid-ranger from 2006. Early rumors claim that the spec sheet will be mostly the same, except for the smaller 2.4” screen.

How to turn of keyboard sounds on nokia 8000 4G

Thats bullshit. You have T9.