We start with the most common scenario. All cameras had their ISO setting set to automatic and flash was enabled. Each of the contenders was shot in its maximum native resolution, save for the Nokia 808, which appears twice on each set of crops - once in its full-res 38MP mode and once in the 8MP PureView mode we believe will be most frequently used.

We placed the subject about a meter and a half away from the cameras, as we doubt many will shoot such wide-angle lenses from much greater distance. Here go the crops. 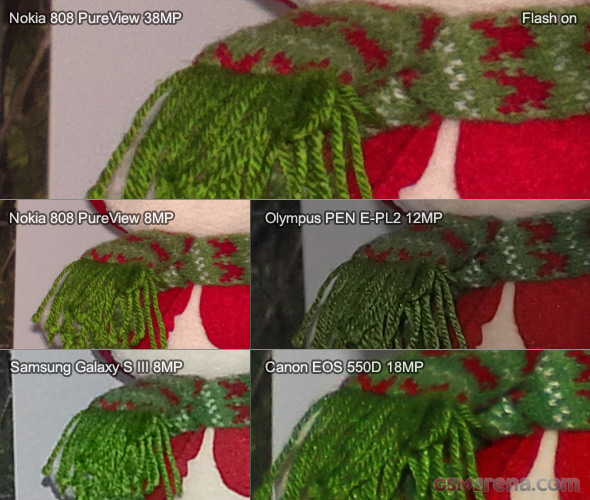 The Nokia 808 PureView put its Xenon flash to great use, capturing an amazing amount of detail here. The native 38MP mode did show some noise, but nothing we can't live with, while the 8MP PureView shot is simply stunning.

The Samsung Galaxy S III cheated quite a lot there as it dropped its shutter speed to 1/15 which, combined with a LED flash, allowed it to keep the ISO at 200 only. However in real-life scenarios (when you don't have a tri-pod like we did) photos shot at this kind of shutter speeds are certain to come out blurred due to camera shake more often than not.

But even if we assume that every Galaxy S III owner is an experienced photographer with a super steady hand, its output is still nowhere near the PureView standards.

As for the two large-sensor cameras, the Canon 550D chose to underpower its flash and shoot at ISO 400, failing to match the 808 PureView. The Olympus E-PL2 did better and almost matched the Nokia smartphone in terms of resolved detail, but its photo came out with extremely poor contrast, which means the Finn got the first win for today.

You can check out the full-res samples from all cameras below.