For the second test we disabled the flash units to get them out of the equation. That's hardly going to be as frequent a case as the previous one, but it was a good way of testing the 808 PureView performance in those scenarios when flash usage is simply pointless - i.e. when shooting landscapes or when the subject is reflective and the flash will ruin things.

Here go the two set of crops from the two images we captured. 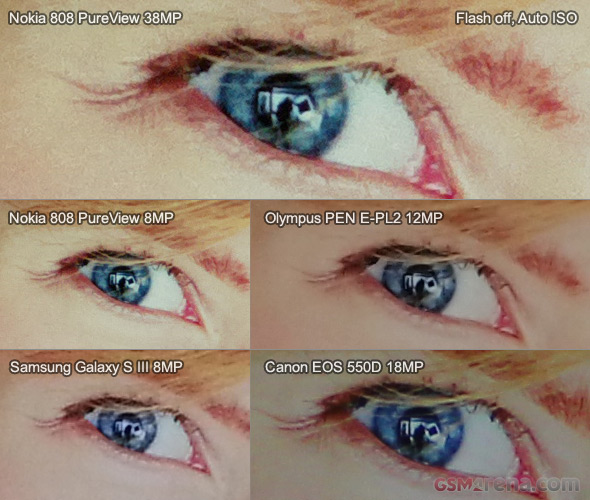 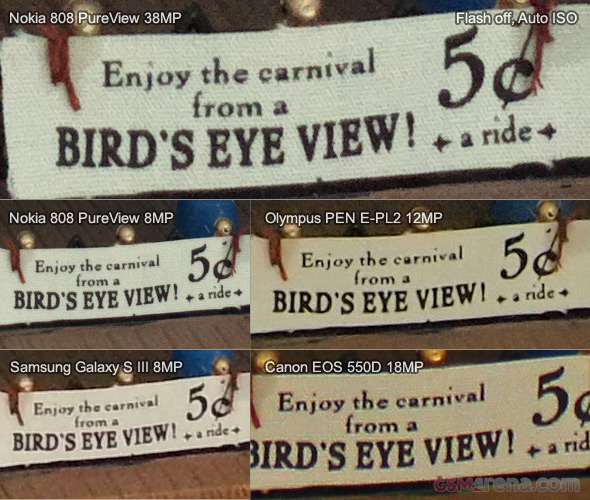 Impressive, isn't it? The Nokia 808 in 38MP mode has the most detailed output and even its 8MP PureView mode showed quite a lot of fine detail. Granted, when using 38MP mode the Nokia smartphone images come out the noisiest, but it's the less irritating luminance noise, rather than the color patches that dominate the low-light shots of other smartphones and didgicams.

With the first shot the Nokia 808 PureView kept the shutter speed at the relatively easy to handle 1/25, but it did go the Samsung way with the second photo and dropped to 1/16. The Canon 550D DSLR camera stuck with 1/30, which should normally allow you to capture sharp photos at this focal length if the subject isn't moving while the Olympus chose 1/50 and 1/60 settings, which are certain to avoid camera shake and even motion blur on most occasions. However the higher shutter speeds of the Olympus camera meant that it needed to go for a higher ISO setting, which inevitably took its toll on the image quality.

Keep in mind that the two cameraphones have the luxury of using brighter lenses here - the 808 PureView F/2.4 and the Galaxy S3 F/2.6 apertures allow them to keep their ISO lower for the same shutter speeds compared to the F/3.5 kit lens we had on the Canon and the Olympus.