The Nokia 8 first received Android 8.0 at the end of November and recently started experimenting with a second serving – 8.1 Beta.

That didn’t last long as the stable Android 8.1 Oreo update is now rolling out.Juho Sarvikas (CPO of HMD) just made the announcement, but at least one person in the Twitter thread has already downloaded the update. 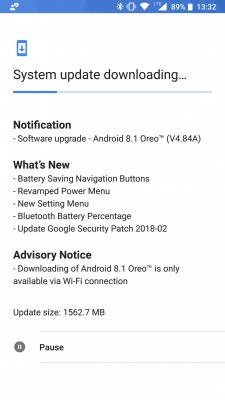 The update – V4.84A – has the same change log as the Beta version, except that the Security patch has been bumped up to February. The update is a hefty 1.5GB so you better sit down and connect to a Wi-Fi network.

That comment is so ridiculous, I don't even know where to start. Tell me, do you use windows? Do you think all windows users should throw out Firefox and Chrome and make IE and Edge 'mandatory'? Should iphone users stop using google search and ON...

but camera still old why not yet fixed update

Oh please. It is mandatory. The Google app is Google selling point. Android is free. But it comes with costs of Google App. You have to use it. “Pure” here means you wont get duplicated apps. One from google and one from OEM.