Nokia Lumia 1320 has been just announced at Nokia World. It's another 6.0-inch phablet, this time around with a 720p IPS ClearBlack display and powered by a 1.7GHz dual-core Krait processor.

The Nokia Lumia 1320 is LTE-enabled and comes with a 5MP camera with a single LED flash on its back. It packs 1GB of RAM, 8GB internal storage expandable via a microSD slot and a 3,400mAh battery. 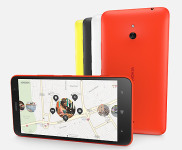 Nokia Lumia 1320 will become available early next year in orange, yellow, black and white flavors. The first countries to get it are China and Vietnam, with more Asian and European markets following shortly after. Nokia's suggested retail price before taxes or subsidies is $339.

mictosoft has more money a lot alot and lot more money ready to get pored in windows phone after they buy nokia.

with a microsoft branding.. ehh, microsoft a wannabe ? lol