Nokia to hold a Lumia event on May 14, a new device on the way?

Nokia has just revealed its plans for a dedicated Lumia event on May 14 in London via press invites. In the said invite the Finns kindly offer the press and the public to "see what's next" and take a front-row seat as "the Nokia Lumia story continues." 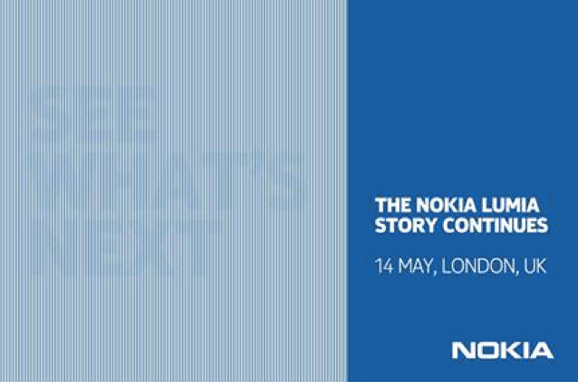 With leaks of the Lumia EOS intensifying, it's more than possible that the Finnish phonemaker will finally make its first Windows Phone PureView smartphone official. The fact that the leaks surrounding it suggest an aluminum uniboidy, which might show the new Nokia design language make it even more exciting.

While the event will be centered around the company's Lumia line-up, it's not totally unlikely for Nokia to finally unveil its efforts in the tablet segment. It'll certainly give Windows a much needed boost in the slate market.

Whatever happens, we'll be covering the event, bringing you every detail as it surfaces, so make sure you stick around come May 14.

Is iit possible to launch it in the same time in Southeast Asia?

Nokia still has what it takes to join the competition. Pure View... 41Mega pixel camera. I'd love to see it on Lumia phone... (Thinner phone...)