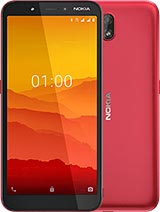 Babs, 04 Jun 2020Just bought one yesterday and realized that I have been scammed, thinking about smashing the p... moreThe phone is smart sha, but ba3 not that strong...I love it browsing speed although it's 3g there's a difference

Just bought one yesterday and realized that I have been scammed, thinking about smashing the phone, how on earth can you produce a smartphone with 3g in this modern times of 4g probably 5g in the coming month. I suggest you make a provision for a software update to a 4g immediately. If not then this is biggest scam ever and I advise that nobody should purchase any Nokia c.... Cell phones

MALATJI, 19 May 2020yes it has face idPlz where can I find the face id

i bought this c1 is working nice don't c prblm

The phone is good to use as a daily driver. My only problem is with camera. The camera focus is way too bad. Wish that nokia could come with a software update to handle this issue...

Kash, 04 Mar 2020Normal fone but if battery placed in it worth 4000mah then can be useful. Caus bettery time is... morethe battery is removable so you just remove the depeated one let the phone cool and add another fully charged bad boy

This phone has a very weird issue, am i the only one who is noticing that it's whole dimensions are not ok anybody else check his/her C1 precisely that how icons and text are aligned with each other and how the whole phone is actually has uneven dimensions on each side.

Anonymous, 25 Apr 2020Tecno pop 2fHmmm I wouldn't necessarily say that. That can at least shoot in 1080p. And idk if the SoC is better or worse because the C1's isn't listed on here. The only thing worse from what I can tell is the very slightly smaller battery.

The C1 is trash so why are you trying to defend it.

joe nodden, 21 Apr 2020Better? What phone is there that's worse than this? Tecno pop 2f

Afzal, 18 Apr 2020This phone is much much better than its competitors in respect of price. All the features are ... moreBetter? What phone is there that's worse than this?

This phone is much much better than its competitors in respect of price. All the features are nice. The only problem is 1 GB RAM.

Is the device has face id

I bought the phone, after looking in 3 shopping centres.
Everywhere it days Samsung Galaxy is best seller. But they have stock. I finally got 1 buy buying the display model in the window. So I recon the Nokia C1 is the tip seller as it was sold out everywhere.
GSMArena note that the C1 does have USB on the Go! So update the specs.
Android go works fine. Duel SIM works fine. Bluetooth and WiFi works fine. Android apps works fine.
Cameras are okay quality. Not the Nokia 930 quality, but that is comparing a flagship phone to a decent entry level phone.

How can solve outgoing calls are restricted by fdn nokia c1

Total of 293 user reviews and opinions for Nokia C1.
ADVERTISEMENTS