A couple of new Nokia phones appeared on Nokia's European website today. Rather than successors to the Nokia N9, the Finnish manufacturer has developed some variations of the C5-03, namely the C5-05 (also known as the C5-04 for the Canadian market only) and the C5-06. 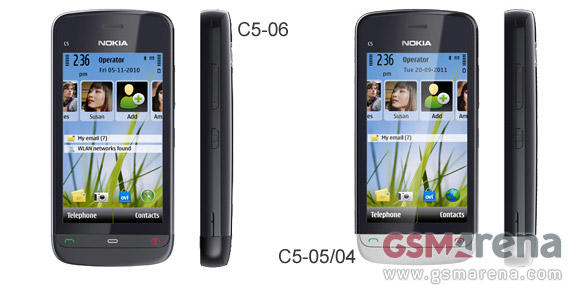 Unlike the more powerful C5-03, both C5-05 and C5-06 come with a downgraded 2-megapixel camera, as opposed to the 5-megapixel shooter on the back of the C5-03. The new cheaper alternatives of the C5-03 also come without 3G support, so it's only 2G for those budget feature phones.

Unfortunately, C5-05 misses out on Wi-Fi connectivity, so that makes this particular one so cut out on features, that it seems the best fit for your grandparents. Prices of both devices is unknown, but we suspect it to be noticeably less than the C5-03, which costs around 120 to 140 Euros.