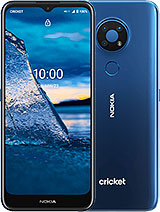 I have all the same issues...freezing up going black flashing on and off wrong password slow camera moment is over before camera comes on sometimes 15 seconds. I have returned the phone and got a replacement...same issues I need to turn off and back on 5/6 times a day. I never hated a phone more.

LLW, 16 Jan 2021I just bought this phone and used it for a few days first without the memory card and then put... moreI do not know what to say,as cricket is here the main player for the software. I cann't get this device as i live in europe, but if i would have had it, i would probably find the problem, if there is one with the hardware or crickets software.

Que Onda, 05 Feb 2021This phone works great. I've had it for about 2 weeks & haven't encountered one ... moreI'm having this same problem with my Nokia it freezes up and sometimes it does not let me put my pin in cuz when I put it in it denies it

Que Onda, 05 Feb 2021This phone works great. I've had it for about 2 weeks & haven't encountered one ... moreI have had this phone for a little over 6 months and it was three of the top line phones I could get from cricket at the time and this phone has absolutely been hands down the worst phone I have ever owned for the price tag which I got $150 cheaper through my upgrade this phone has given me more gray hair I think within the last 6 months then I've gotten in the last 2 years I want nothing more to throw this phone or drop it off the top of a rooftop because if you say this phone is good you're smoking crack and give more time

This phone works great. I've had it for about 2 weeks & haven't encountered one problem. These negative reviews are all lies. They have to be. Somebody is trying to smear Nokia or Cricket. Or both. Or whatever. There's nothing wrong with this phone. In fact it's a hell of a phone for the price.

Mal, 29 Jan 2021I've had my Nokia C5 Endi for about a month now. I have Cricket service. Little did I kno... moreSo true I bought this phone yesterday,and it froze up would not start of for 20 minutes later. I'm taking it back today.

I've had my Nokia C5 Endi for about a month now. I have Cricket service. Little did I know until reading all of these comments that I'm not the only one having some major problems with the phone. AS everyone else has stated, the phone would freeze up for no apparent reason and shut off from the day I got it. It has also not received text messages until 45 minutes after they were sent to me. Idk if it's it's a Nokia problem, A Cricket problem or both. But my advice is DO NOT BUY THIS PHONE!!

I've only had it for a week, and I have mixed feelings... The camera is decent, but I have had it freeze a few times... My main frustration is the Cricket service seems to be worse on this phone compared to my other Cricket phones, and I'm having the most frustrating time trying to get it to connect to my Chromecast

jfranklin , 12 Dec 2020This is a great phone! Good battery life, fast and the camera is great! Great phone for the price.Lucky you most suffer from issues it's good that it fits your needs

do not!! i repeat do not buy this phone stay away!!! the lagg is so damn horrible!! and my camera is just ughh i'm going to throw this phone

Carol, 27 Oct 2020Why do i have the feeling the problems with this device come because of Cricket? As no Nokia d... moreI just bought this phone and used it for a few days first without the memory card and then put the mem card in. The freezing issue was already present before and the memory has nothing to do with it. Might it be the processor speed?

This phone sucks. I can't do anything . Programs shut down. Phone freezes if I play game or use the camera.

DO NOT BUY THIS PHONE!!!!! DO NOT BUY THIS PHONE!!!!! DO NOT BUY THIS PHONE!!!!! I hope I have got my point across. Im not one to go out of my way to make a complaint only when need to be; but I feel this is neccessary. I have had nothing but problems with this phone. When I first purchased this phone I read the reviews to see what people are saying and they were experiencing the same issues as me. I was assuming those reviews were over hyped due to someone using it for gaming or anything. THat is not the case for me. I use this phone for work and general use. This phone will constantly crash when I try to use my camera or snapchat or just genereal app using. Typically what a phone is used for I am experencing nothing but freezing and locking up. Ive gotten to the point where Ive contacted Cricket to see if there is something that can be done and they have told me that not a lot of ppl have complained about the issues. THey have told me I can try to go through a claim to send the phone in only to know that I will be without a phone for a week.

Well i just returned this phone too much lag and it keeps shouting down o. Is own

Carol, 20 Dec 2020Let's say i believe you, you work for cricket and can't afford at least a midrager. ... moreAbsolute garbage. I got my phone yesterday and my god it already has so many issues. It shuts down, freezes, and it wouldn't take my password. Closes out apps upon many more issues. DO NOT BUY THIS PHONE I'M BEGGING YOU. I'm returning it today.

Anonymous, 16 Dec 2020I'm a store manager at a cricket store and even I can assure you that this phone is absol... moreLet's say i believe you, you work for cricket and can't afford at least a midrager. But tell those problems to cricket, as Android one does not have them. How can such problems even be hardware related? Yeah for the unknowing mass might sound like real...

Hate Nokia, 14 Dec 2020Your probably right,it probably is crickets fault this phone sucks.Cricket has a rep for doing... moreWell it is sad, i do not know cricket, but this is hilarious...

I'm a store manager at a cricket store and even I can assure you that this phone is absolute garbage! I upgraded from a moto g7 supra to this phone, worst mistake ever! Glitches every second, closes apps when I'm not even done using them, and I couldn't even send or receive text messages after only 3 days with it! I thought it was the service at first but when I put my sim back into my g7, my service was just fine. I'd recommend the crappy Alcatel or the flip phone we sell before I even think of even suggesting this one to any of my customers. It's a terrible device. DO. NOT. BUY!

Just know I have done some research and this isn't a nokia problem,it's a cricket problem.They are doing nothing to fix it but it's the software they put on it.If you noticeanyone who bought the phone outside of cricket says the phone is great and they love it but not one cricket owner has anything good to say about it.Cricket is a crap company who could careless about fixing these issues.This is all crickets fault,not nokia