Unlike some competing platforms, Symbian handsets have always enjoyed a proper file manager. The File manager on board the C7 is a capable app that can basically do anything you can think of with your files - moving, copying renaming, sorting or sending - you name it. You can also password-protect your memory card if you see fit.

You can also search for a specific file or directory. All you need to remember is a part of the desired name and where it was located (phone memory or memory card), the Nokia C7 will find it in no time.

With USB on-the-go enabled on the Nokia C7, you can also use the file manger to access USB flash drives and even other phones connected over the optional USB cable. Of all the USB flash drives we tried to connect, the C7 only failed with one.

Non-Nokia handsets wouldn’t communicate with the C7 too. We tested an Android handset, an iPhone and even a Bada device and they all started charging but wouldn’t connect in mass storage mode.

When we plugged the other end of the USB cable in a Nokia E71 though, its memory card immediately popped up inside the C7 file manager.

Symbian^3 might have vastly improved the UI but the gallery was definitely not on the upgrade list. The Nokia C7 comes with virtually the same image browsing software as its predecessors and, honestly, it’s barely passable by modern standards.

Sure, sweep gestures have been available for a while now and you are also getting pinch-zooming now with the C7 so it’s not all bad but some eye-candy would have been more than welcome.

Once you’ve zoomed on an image however, there’s no kinetic scrolling and panning and that’s sure to cost the C7 a few points. On the positive side, opting between portrait and landscape mode is automatic, thanks to the built-in accelerometer.

Selection of multiple photos for deleting or sharing is available straight in the gallery. Unfortunately, sharing is only available via MMS, email or Bluetooth with no image sharing service integration. We guess that can be easily fixed by installing the necessary uploading profiles for the services you’re interested in. At least that’s how it works on non-touch Symbian smartphones.

Overall, picture browsing is relatively fast even with 8MP pics, but zooming is somewhat slow. You need to wait for a second or two every time you start zooming in on a photo.

Symbian never had trouble with the music player features but its looks were far from impressive. With Symbian^3 however Nokia introduces a new Cover Flow-like interface, which adds the much needed eye-candy.

There’s automatic sorting by artist, album, genre and the option to create custom playlists straight on the phone.

The music player got a visual upgrade too

With the huge number of supported formats, equalizer presets and effects the feature set is complete.

Functionality is pretty solid too

There's not much that separates the Nokia C7 audio output from the one of the Nokia N8. Just like the Nokia multimedia flagship, the C7 achieved great scores in our traditional test and is quite loud too.

When attached to an active external amplifier (i.e. your car stereo or your home audio system), the Nokia C7 performs greatly with no weak points whatsoever.

There wasn't much quality deterioration when we plugged in the headphones either. Sure, the stereo crosstalk got a bit worse (but surprisingly the drop wasn't as big as with the N8) and we recorded some intermodulation distortion, but those are rather hard to detect in anything but lab conditions. 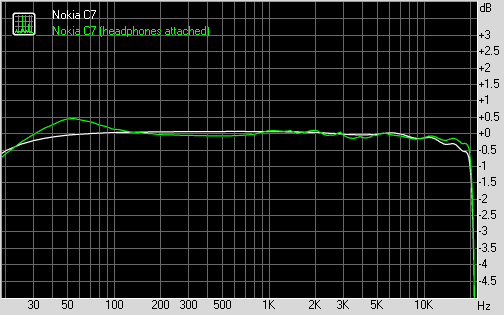 Video player is impressive, could use some subtitles

When it comes to video playback on Symbian smartphones, the Nokia C7 is still among the lucky few to have DivX and XviD support out of the box. And it doesn’t stop there.

The playback was silky smooth on all files with a resolution up to and including 720p, which is quite impressive.

The media player app itself only works in fullscreen landscape mode but, since anything else would have made the widescreen display useless, this is understandable. In fullscreen mode, a tap on the screen shows the controls, which are otherwise hidden. The amply sized high-contrast screen is also more than welcome for truly enjoying your videos.

Watching a video on the C7

Some restrictions do apply though. For one the handset cannot play any file that is larger than 2GB and you cannot fast forward and rewind ones larger than 1.5GB. If you manage to keep your files below that limit (which basically excludes full-length 720p HD movies) you will be fine.

The other problem with the video player is the lack of any kind of subtitle support.

Generally, the Nokia C7 does extremely well on the video playback front but is certainly not perfect. Nokia should be able to address all those little shortcomings in some future software updates.

And in the Web TV section you'll find a handful of apps giving you access to the latest news as well as to movie trailers or even whole episodes of various TV shows. The apps here include YouTube, CNN Video, National Geographic, and Paramount Pictures' Movie Teasers applications. Of course, each of them requires internet connection (over 3G/3.5G or Wi-Fi) and note that not all content is free.

The FM radio on Nokia C7 has the same neat and simple interface as on its Symbian^1 predecessors. You can search skip preset and new stations alike with sweep gestures or you can use the virtual buttons.

The C7 has RDS support and automatic scanning for an alternative frequency. This means that if you travel, the C7 should hopefully be able to auto-tune to your selected radio station.

RDS is the best part of C7 radio app. The radio station name gets displayed with cool effects across the whole screen, while the rest of the readings are printed in nicely legible font at the bottom.

An FM transmitter is on board, too

Nokia C7 is among the few phones to come with a built-in FM transmitter. This cool feature allows you to stream the music on your phone to any standard FM radio receiver nearby at a frequency of your choice.

The FM transmitter UI is as simple as it gets

All you need to do is find an available frequency slot within the standard FM scale between 88.10MHz and 107.90MHz. Finding a position without radio interferences is harder in some places (big cities are usually radio polluted).

But whatever the case with the available frequencies, the FM transmitter app is simple enough to guarantee smooth and easy operation.

You should also keep the phone and the receiver within close distance or the signal quality quickly deteriorates. In our test we couldn’t afford moving any further than 2 meters away from the receiver but your mileage might vary.