The Nokia C7 is equipped with an 8 megapixel camera for a maximum image resolution of 3264 x 2448 pixels. That sure sounds great at first but things are likely to change dramatically as soon as you realize there’s no auto-focus. Well, at least you do get a dual LED flash so night shots and video should be better.

High resolution and fixed-focus is a combo that doesn’t seem to make much sense. As a matter of fact, the images produced turned out as bad as we feared. On top of that, the camera interface is far from user-friendly.

There are only three shortcuts available in the viewfinder. Those allow you to toggle camcorder and still camera, set the flash and access the rest of the customizable settings.

It would have made much more sense if some of those settings were brought on the sides of the viewfinder too as it would have saved us a few clicks, but Nokia engineers didn't think so. Not to mention that the extra camera settings are the only part of the interface where you can still “enjoy” the single-tap-double-tap routine that plagued the previous version of the Symbian touch interface.

On the other hand, the basic functionality is mostly there. On the C7 you’re in charge of white balance, color tone, exposure, ISO, contrast and sharpness. You can also go for one of the preset scene modes and there is an option for creating a custom scene.

Face detection is also available on the Nokia C7. As for geotagging, it lets you record your current location in the EXIF information of the photos, using the built-in GPS.

As for the image quality, we must say we expected way more from the C7. The aggressive noise reduction smudges fine detail, there are plenty of oversharpening artifacts to see as well as softness in the extreme corners.

On top of that, there’s a greenish tint in the upper half of the images which somehow gradates into pink tint in the lower half. It’s most easily visible on the chart photos below.

Update 05 Nov: To redeem the Nokia C7 here are a couple of shots taken with the sharpness set to a lower, more acceptable level. As you can see, most of the artifacts seen on the previous samples are now gone so the result is definitely more pleasing.

With sharpness tuned down, photos turned out for the better so much so that we actually went ahead and shot a comparative shot with the XPERIA X10. The Nokia C7 is actually quite on par with the XPERIA X10 - except in closeup shots, of course where the fixed focus C7 loses by a wide margin.

However the major missing feature – autofocus – becomes apparent when you try taking a closeup shot. Anything closer than 50cm is a no-go and to give you a perspective, to fill the frame with a standard A4 sheet you need to get as close as 30cm.

In fact due to the strong noise reduction smaller text fonts are hardly legible even when the text is in focus, so making nice shots of documents and leaflets is a challenge.

Theoretically, the 8 megapixel sensor allows you to shoot from further way and then crop (or zoom in) to see the details you're interested in. You can't do that with a 3 megapixel fixed focus camera. But the heavy noise reduction on the C7 is harsh on the fine details (such as fine print) so it's still not up to the task.

Here are a couple of samples that demonstrate how poor the C7 is with close ups. One is shot from approximately 50cm - the minimum focus distance - while the other is shot from even closer so we can fill the frame with the A4 sheet.

Nokia C7 is not really good at closeups

We also snapped our resolution chart with the Nokia C7. You can check out what that test is all about here. 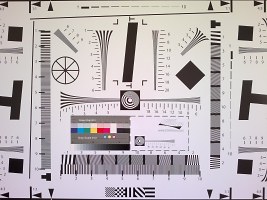 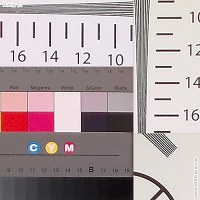 Video recording was a nice surprise

The Nokia C7 shoots in 720p resolution at 25 fps and offers digital image stabilization. Clips are stored as MP4 files. The poor still camera performance led us to expect poor performance here as well, however we were in for a nice surprise.

As opposed to the N8, image processing is obviously more aggressive. They were going for more "punch" instead of a more natural look to videos and it should work fine for the target audience.

To sum it up, the videos shot with the Nokia C7 did manage to impress us. The amount of resolved detail is good enough, colors look nice, noise levels are kept reasonably low. They are perhaps even better than those produced by the XPERIA X10 after it got its HD-touting 2.1 update.

The price of the lower compression affects the file size – 10 seconds of video take about 16 MB.

Finally you get a smart digital zoom in video mode just like on the Nokia N8. It means that you can zoom in to about 2.5x without losing detail. It's pretty impressive if you think about it and the fact that the C7 is one of the very few handsets to have it earns it an extra point.

The video-recording capabilities of the C7 make up big time for the poor still imaging.

Even mid-range smartphones have excellent connectivity options these days and it would’ve been strange if Nokia C7 failed to deliver. Fortunately, it has no reasons to feel embarrassed – the phone supports almost every data transfer option you would need and then some more.

USB is version 2.0, with the standard microUSB port capable of charging the phones besides transferring data. We already covered the USB on-the-go functionality, but just for the record, we had almost 100% success of connecting USB flash drives and other Nokia phones, but that’s about it. The Nokia C7 didn’t connect to card readers and phones by other makers. Unlike the N8, though, the C7 doesn’t come along with an USB on-the-go adapter.

Bluetooth connectivity is version 3.0 with stereo support and there's a WirelessN-enabled Wi-Fi radio.

The microSD card slot can be used for transferring data to and from your C7. It’s under the battery though and no hot-swap is a nuisance. However both the memory card and the internal memory are accessible when you connect the handset to a computer in Mass storage mode and we managed to get speeds north of 10 MB/s when transferring data this way. That means you’d hardly ever need to use an external card reader.

For the record, the Nokia C7 lacks the microHDMI port, found on the N8.

Unfortunately, Symbian^3 didn’t deliver the browser overhaul that the platform needs desperately. Despite the added multi-touch and FlashLite 4.0 support, the C7 can just watch helplessly as the Android Froyo speeds away.

Update, 24.08.2011: We installed Symbian Anna - check out our impressions of the new browser over here.

Starting with the good things, the Nokia C7 browser has good page rendering and offers some nice features such as different font sizes (5 options), auto fill-in of web forms and a password manager.

The Flash Lite 4.0 support is enough for playing flash videos, but it’s not quite as impressive a performer as the desktop-grade Adobe Flash 10.1 for Android Froyo. You can also choose to switch Flash off to cut down on loading times and save some data traffic.

The Find-on-page feature enables keyword search. The visual history is a nice bonus that can help you find a page you've visited more easily. There's also a popup blocker.

The web browser won’t let you open a new tab unless you hit a pop-up link. We'd have really preferred to see an option to open links in a new window.

Double tapping on a chunk of text zooms it in on screen, but again, the text doesn't auto fit to the smaller viewport and you still need to scroll sideways.

Digging deeper into the settings menu

One of the worst parts of the C7 web browser is entering a web address, which can take up to four steps, while most competing platforms do it with one – hell, some even do it with voice commands.

So, generally speaking, the Symbian^3 browser is hardly a better copy of its S60 predecessor and that’s certainly to the C7 detriment. Internet browsing has never been more popular and until Nokia did something about the usability of their browser, their smartphones will be getting quite a lot of stick for it. Sure, we’ve heard Nokia has plans to update it on all Symbian ^3 devices in the future. We’re yet to see how it goes then.

For now, if we could give you an advice here, we’d say get the latest Opera Mobile up and running on you C7 and use the default browser only when you need to access Flash content. The hassle of using two apps for the same purpose is still better than having to deal with the S^3 web browser shortcomings.