The 8 megapixel snapper at the back of the Nokia N9 might not be as much of a selling point as the 12 megapixel monster that the N8 packed, but that doesn't mean that its development took less effort. If you doubted this fact, you should definitely check out the interview with the Nokia Senior Manager for Solutions Planning Damian Dinning.

The man who played a key role in developing the imaging experience and the camera/video quality for a series of Nokia flagships including the N95, N86 8MP and, of course, the Nokia N8 camera, stepped on stage to reveal some of the secrets that the N9 snapper hides. Here are some of the key points that Mr. Dinning talked about.

Now you might have noticed that earlier, but the N9 camera isn't exactly 8 megapixels. The number MeeGo flagship sensor actually has 8.7 million active pixels and an unorthodox 1.45:1 aspect ratio. This allows it to shoot in both 4:3 and 16:9 modes without much resolution loss.

So while the N8 loses a quarter of its 12 megapixels to produce a 16:9 image, the N9 only sacrifices 1.6 megapixels to go widescreen. The price that the Nokia N9 paid is that it's unable to shoot at its full 8.7 megapixel resolution at all and 8 megapixels is the best it can do. Check out the illustration below to see how this actually works. 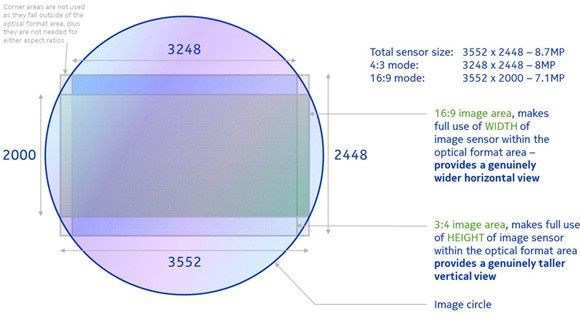 Next, Damian Dinning, highlighted that Nokia has equipped the N9 with a sharp Carl-Zeiss lens that offer the largest aperture (f/2.2) in business. A larger aperture (indicated by a smaller F-number) allows more light to reach the sensor, which usually results in better low-light images. You see with a brighter lens the camera can choose to use lower ISO or higher shutter speed, which results in less noisy or less shaky images.

And to those of you wondering just how bright f/2.2 is, it is 75% brighter than the N8 lens. So if the two cameras decide to use the same shutter speed the N9 will be able to pick a significantly lower ISO setting than its sibling, and still get the same exposure. So while the N8 does pack a 70% larger sensor, you should expect a similar image quality from the N9.

By the way the Nokia N9 camera also packs 28mm wide-angle lens, so you will be able to fit more in the frame with it.

The N9 flash unit also got some attention. Now it's no xenon, but it's the most powerful LED produced by Nokia yet. The gain compared to the previous best is 20%, which isn't bad at all considering its compact size.

We'd like to remind you that the first batch of Nokia N9 camera samples surfaced earlier today. You should definitely go and check them out in our blog if you haven't done so already.

And if you feel like reading more about the Nokia N9 camera, feel free to follow the source link for more from Mr. Dinning.

ok all the guys here comment are right because more mega pixel give quality but a faster sensor give better quality. BTW n8 whit its 12 mega pixel camera in the real world is worser than n9 whit an new 8 mega pixel camera. believe me its real.