After Geekbench, the Nokia D1C smartphone has now been spotted on AnTuTu benchmarking service. The listing reveals that the device sports a full HD display, features a 13MP rear and 8MP front camera, and has 32GB internal memory. 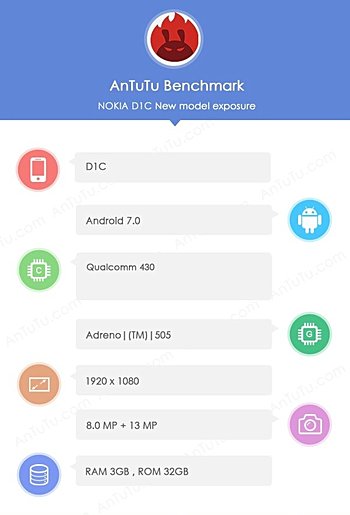 Other specs revealed by AnTuTu - including Snapdragon 430 SoC, 3GB RAM, and Android 7.0 Nougat - are inline with what the device's Geekbench listing had revealed.

I think adreno 505 is too weak for a full hd display.520 would have been better.Its antutu score should be the same as the redmi 3s given their specs are almost the same

Only on in NOKIA as a real feel to mobile level.

nokia is a better to better phone