The Nokia E6-00 has come out of the shadows yet again in another of its typical monthly leaks. If you remember, it was first hinted in a leaked Nokia XML file, then a month later some photos of the device emerged. And finally, a couple of weeks ago, a new photo of the E6 was revealed with the phone sporting a classy black look. 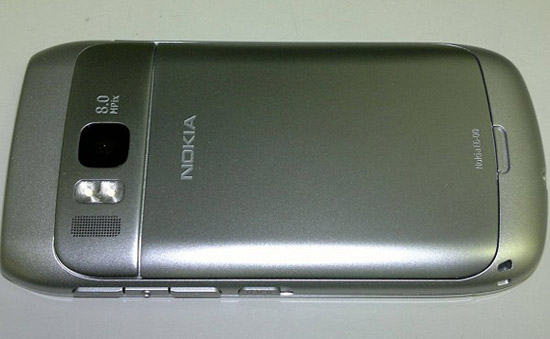 This time though, the Nokia E6-00 pays a much bigger visit to the masses. Instead of being shy, showing only a couple of images, a member of the Nokioteca Forums got his hands on it and took the unannounced Nokia candybar for a test drive.

Not only did he take clear photos of the white Nokia E6, but he also made a couple of software tour videos along with camera samples.

All this means that now several things are confirmed. First, the Nokia E6-00 features an 8 megapixel dual-led flash EDoF camera, capable of 720p video recording just as the cameras on the E7-00 and the C6-01. Also, the OS is a special version of the Symbian^3 adapted for 4:3 aspect ratio screens.

Here are the hands-on images of the white Nokia E6-00 candybar.

Not only does the E6 look good in white, but also it sports a front VGA camera. The screen is what appears to be a 2.6-inch capacitive touchscreen with a resolution of 640x480 pixels.

As we told you, the 8MP snapper on the back of the E6 shoots 720p HD video. Here's a video sample but keep in mind that the device probably packs early pre-production hardware and software, so the quality of the video and images is not final.

Finally, here are the three Symbian^3 tour videos. Don't get too excited though, as they are really blurry and not too revealing. Nevertheless, take a look at them, but don't try too hard to read what's on the screen, because your eyes will hurt.

There's no word from Nokia about neither a release timeframe for the E6-00, nor how much it'll cost. What we do know is that we can definitely expect it to come out in white and classy black.

Very well said sonu. The bottom line is "You need practical phone who does the job very well."

edof will be good when capable of taking photos at 10cm.