Nokia kicked off the event by announcing a software boost for all Windows Phones, including the Lumia Camera, before bringing out the tangible goods in the Nokia Lumia 830 and Lumia 730. Both are midrange smartphones, the 830 touted as "the first affordable flagship".

The Nokia Lumia 830 is the thinnest and lightest Lumia, says Nokia, including the thinnest Optical Image Stabilization module - it's slim enough to allow overall depth of just 8.5mm. The camera itself boasts Zeiss optics and a 10MP sensor. 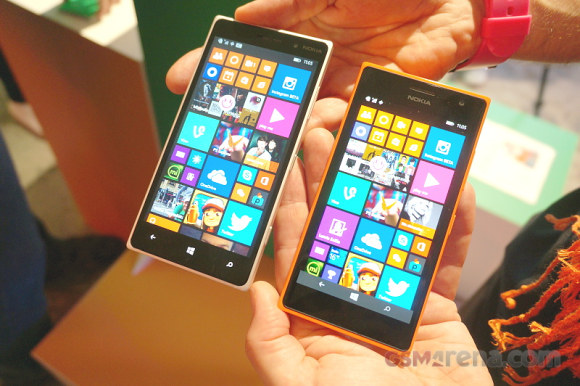 The Lumia 730 slots in just below the 830 and puts a special spin on the front camera (the rear camera is interesting too). Nokia has developed a dedicated Lumia Selfie app that works best with the 5MP wide-angle camera on the face of the Lumia 730 but will also be available for all Lumias.

The Lumia 730 is a 3G dual-SIM device but a Lumia 735 version will offer 4G LTE connectivity. The Lumia 830 has LTE by default, all three new models will ship this month.

Both phones will ship with the new Lumia Denim release responsible for a lot of improvements to the software. This includes the new Lumia Camera and the Selfie Camera apps. The Lumia Camera app enables 2160p video recording and creative new ways to edit photos after the fact - including choosing whether the flash is enabled or not!

Nokia also unveiled a couple of new accessories - a notification-centric wireless charging plate and a Windows Phone alternative to the Chromecast.