Back in 2010 at Nokia World in London, the Nokia Research Centre demonstrated a neat concept of navigating indoors. Now, there's a new version of the system and Nokia has put up a video promoting it. 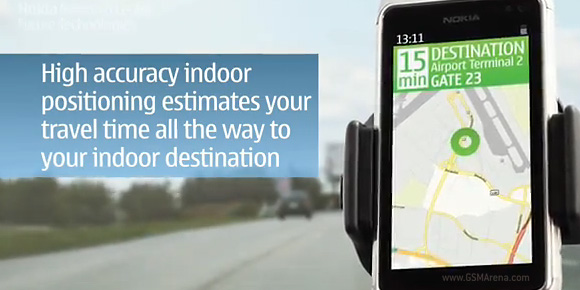 The system relies on a positioning beacon, which acts as a "satellite", but just indoors. It is placed on the ceiling and can track how far you are from your desired destination in real-time and is accurate up to 30cm.

A special tracking device, which can be attached to various objects and clothes is available, too. With its help, Nokia's Indoor Positioning can track valuables or even people for that matter. Useful if you have a bad habit of misplacing your belongings.

And here's the promo clip in question.

The novelty looks pretty damn promising, but unfortunately, there's no official word from Nokia when we can see the Indoor Positioning functioning in the wild and available to users.

wasn't this technology first introduced at world mobile congress last year where nokia made their own exhibition at a nearby site? I think I remember a nokia demo from some kind of exhibition where they tested it and it was all over the internet.

Hahahaha, I laughed thru the whole clip. I have a GalaxyS and my friend says that I should remember things rather than use Catch on my phone, because it will make me dumber. This guy is the same, his phone is controlling him and his life and not ...

I'd buy an N8 if that car at the end would have hit him.