The Nokia Lumia 1020 headliner is its 41MP camera at the back. And while the resolution is the same, the camera module has been significantly redesigned since the Nokia 808 PureView.

One of the few things that the two PureView sensors have in common is that even though they technically are 41MP units, they aren't actually able to take 41MP photos. Here you can see all the different image aspects and their respective resolution. The sensor has a total active surface of 7728 x 5368 pixels, which does amount to 41MP, but depending on the aspect ratio you choose, it will capture either a 7728 x 4354 pixel image (34MP) in the 16:9 mode or a 7152 x 5368 pixel image (38MP) in the 4:3 mode. 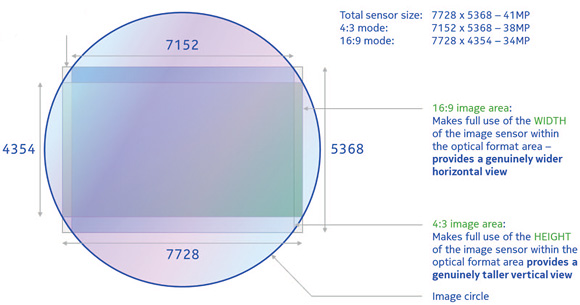 Using the new Nokia Pro Camera app, the Lumia 1020 can save a photo in both 34MP and an oversampled 5MP variant. We'll touch more on that later on. Mind you, the default camera app is limited to shooting only 5MP photos in both 4:3 or 16:9 modes.

Probably in an attempt to keep the size of the module down, Nokia has decided to make the Lumia 1020 camera sensor smaller than the one in the 808 PureView. It's 1/1.5" instead of 1/1.2" and this means it has somewhat smaller pixels - 1.12 microns instead of 1.4 microns.

However, the new sensor has a BSI design, which improves light sensitivity. This means it offers lower noise levels in low light, so that probably makes up for the difference in size. There's also the fact that the new 6-element ZEISS lens has a wider aperture than the old one (F/2.2 instead of F/2.4) so it lets more light in.

Finally, there's the Optical Image Stabilization, which is still a rarity among smartphones, but an immensely useful thing to have. The Finns have naturally reworked the thing to accommodate the larger sensor and now you get to take shake-free videos and far better pictures in low light (but OIS is no good for moving subjects).

In case you are not familiar, Optical image stabilization compensates for the movement of your hands and lets you take longer-exposure still shots without introducing blur due to camera shake. Longer exposures, in turn, allow lower ISO setting to be selected and still get the same exposure, only with less noise.

The downside is that those longer shutter speeds are only good for still subjects - any moving object would surely become a blurry trail on the photo (which quite often can be a nice and desirable feature to have).

The Nokia Lumia 1020 camera lens is nicely wide at 26mm - here's how its field of view (in both 4:3 and 16:9 mode) compares to the Samsung Galaxy S4 and the HTC One. The advantage over the Samsung flagship is quite significant and even the 28mm One can't fit as much in the frame. The wider field of view has allowed for a slimmer camera module as well. Even though not everyone will agree, for lenses with fixed focal lengths we prefer to have a wide field of view such as this one. 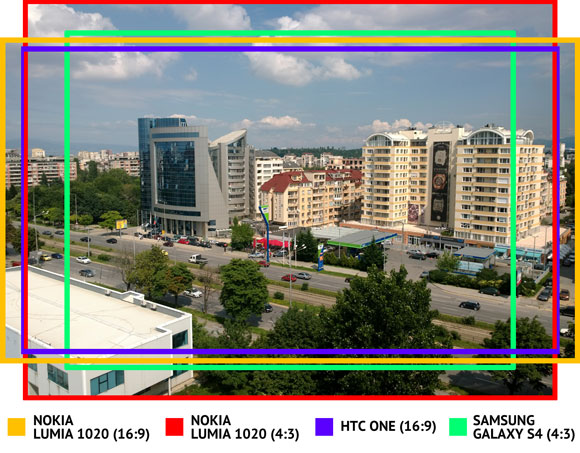 The final improvement that Nokia made to the Lumia 1020, compared to the 808 PureView is the reduction of the minimal focus distance from 20cm to 15cm. This means that the Lumia 1020 is able to get closer to the subject and produce more detailed macro shots.

Now that we've got the technical stuff out of the way, we can move on to the new Pro Camera app that puts the whole thing in motion.