A few days after we saw it wearing AT&T livery, the Nokia Lumia 1020 appeared in yet another press image. This time around, the Windows Phone 8 imaging powerhouse appeared free of carrier branding, and showcasing three colors - white, black, and yellow. 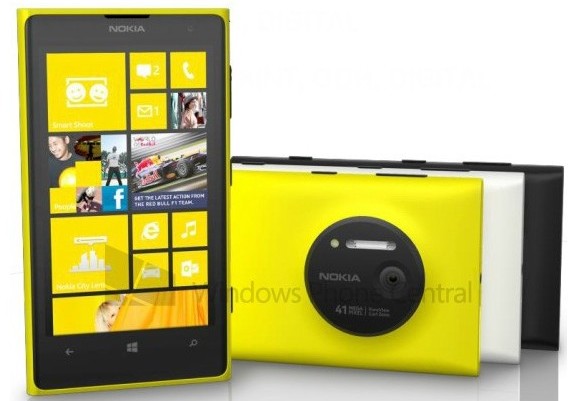 Alongside the leaked press image, some fresh details about the handset's specs emerged, including its much talked about camera unit. The latter promises to be a smartphone photographer's dream when the handset goes official.

Reportedly, the 41MP camera unit of the Nokia Lumia 1020 will be capable of simultaneously capturing 32MP and 5MP images with 16:9 ratio, as well as a 38MP ones with 4:3 aspect. The 5MP image will be oversampled by combining seven pixels into one "super pixel." The camera will unsurprisingly feature optical image stabilization (OIS) and F2.2 aperture.

The Pro Camera app which left us wondering last time will bring proper enthusiast settings to the user. They include the option to manually tweak ISO, white balance, focus, shutter speed, and the flash settings.

Nokia Lumia 1020 is allegedly expected to hit AT&T's shelves by the end of this month. No details have been spilled on international availability.

The Nokia Lumia 1020 will break cover this coming Thursday in New York City. We will be covering the event live from the spot, so be sure to tune in for the full scoop on the smartphone.

I am tempted by this phone. I like being able to take good photos, and the 808 would have been my next phone but the aged OS put me off. I have an HTC One which has a lot to like about it except for the camera. Cropping and zooming is hopeless becaus...

Great phone, minus wp8. Im not saying Android would be better but tile brick UI is not for me.