Large displays are all the rage these days and a phablet with the right price is strategically set to win big. Nokia certainly sees the Lumia 1320 this way, aware of the need of a capable midranger to stand next to the premium 1520.

The Lumia 1520 was the latecomer that went on to steal the show, but not all Nokia had to say in phablets in 2013. The door was left open and the Lumia 1320, which is probably more important to Nokia in the long run, didn't need a second invite. 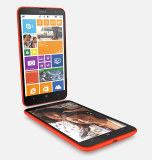 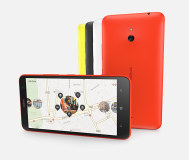 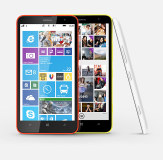 The Nokia Lumia 1320 is toned down version of the Lumia 1520 and is tailored to fit both the needs and budget of its potential customers. We are more than used to seeing Lumia smartphones do well enough on far from stellar hardware, and Nokia's choice of the trusty Qualcomm Snapdragon S4 Pro chipset and a 5MP camera, seems to make sense on a device like the Lumia 1320.

The Nokia Lumia 1320 is a Déjà Vu of sorts - both on the inside and out. We've seen this particular hardware configuration in a handful of Lumia family members, and the similarities on the outside are hard not to notice either.

But if it ain't broke, why fix it, right? The Lumia 1320 is nothing out of the ordinary in terms of build and finish - but one can turn that around and say it's actually quite pleasant and friendly. A bright-colored polycarbonate back cover folds around the inner body, which holds a 6" 720p display.

The good news is that we're talking a massive phone here, so there's quite a lot of room for a battery and Nokia made good use of it. 3,400mAh is a lot and it's a promise this Lumia will run as a happy puppy for extended periods of time, while the dual-core Snapdragon S4 Pro chipset should ensure smooth sailing for Windows Phone 8 OS.

All the pieces of the puzzle tie nicely together when looking at the Nokia Lumia 1320 from afar, but a closer look may reveal the compromises that had to be made to reach this price point. We're all here for the close-up, aren't we? Let's start our journey with a thorough inspection of the Nokia Lumia 1320's exterior.

Thanks have a problem with my phone , the call history didn't appear

Nokia and Microsoft has given the Lumia 1320 phone as office phone. But it does not support pendrive connectivity via OTG cable. This create difficulty to take files from phone to pen drive. If it is possible then it will reduce more efforts...