We were able to snap a demo video of the Nokia Lumia 1520 on site at the Nokia World showroom floor. Check it out.

We had a chance to take a look at the other three color options of the phablet. To start off here's the other matte device of the bunch - the black model. It feels very nice and grippy in the hand and we like the way the ClearBlack screen fits nicely with the black sides and back of the phone.

The red and white variants of the Nokia Lumia 1520 look really nice but feel subpar in the hands due to their glossy finish. They feel slightly cheaper and a little slippery, especially given the sheer size of the device.

Still, even with the glossy topping, the sloping edges, the flat front and back and the overall thin profile of the Lumia 1520 feel equally sturdy as with the matte variants.

Here's a look at the accessories Nokia showed beside the Lumia 1520. They are the flip cover that moonlights as a kickstand, the wireless charging pads and external battery packs.

We snatched two images off the Lumia 1520 - they were both already in the phone. They both fall into the low light category.

The images are both around 5 MP, captured with an exposure time of around 1 second and at the low ISO 200. It's not the full 20MP resolution so the noise levels have benefited from the oversampling. But even for an oversampled image they show amazing low noise levels.

The details are really impressive as well. The optical image stabilization has done its job really well and any blurring is practically unnoticeable (but they've probably used a tripod to shoot them anyway). Every little detail on the scene is nicely detailed.

Of course, these are sample images that Nokia has on the devices on display here at Nokia World so they might not be an absolutely real-life testament to the Lumia 1520 camera prowess but they give us a nice idea of what to expect. Their EXIF shows they've been through Adobe Photoshop Lightroom for some reason, but we'll give them the benefit of a doubt until we have a chance to see the Lumia 1520 in action.

Here go two more samples from the Lumia 1520 camera. The last one we shot in 5 MP resolution but in a 4:3 aspect ratio. The first one looks really nice but as it's a sample already preloaded on the Lumia 1520 we can't vouch for it being a credible real-life example of the camera's prowess.

The last image, which we took was shot indoor without flash under artificial lighting. The camera went with ISO 100 and again we can see great potential, loads of detail and low noise levels, again, thanks to that oversampling of pixels. 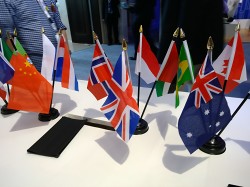