The Photos app handles, well, photos on Windows 8.1 RT. It's similar to what you'll find on Windows Phone, and comes with a clean, easy to navigate interface.

The photos app is divided into the Pictures library, SkyDrive, Flickr and Devices where you'll see the public photos shared by the people in your Homegroup.

Pictures in an album will be displayed in a side-scrollable horizontal grid. By default, pictures are displayed in large thumbnails but you can opt for a more compressed grid by pinching to zoom out.

You can view photos in a slideshow or set the picture you're browsing as a lockscreen wallpaper, app tile or app background. Windows 8.1 RT also allows images to be opened in desktop mode. The latter includes Windows Photo Viewer, as well as the Paint editor.

You can mark multiple photos in an album, which only lets you start a slideshow with them. You copy and cut pictures from the Photos app, as well as create new folders.

The Lumia 2520 is a decent device for browsing photos - the 10.6" screen is big enough and offers good colors and high resolution. However, the 16:9 aspect ratio of the screen doesn't get along too well with 4:3 photos, so you are getting lots of letterboxing or cropping.

Xbox is in charge of music and videos

The music and the video player of Windows 8.1 RT are handled by two separate apps powered by Xbox. Both are pinned to the Start menu once you power up the slate.

Xbox music has been significantly revamped compared to last version. It puts the user's own music collection, the music store, as well as an online radio under the same roof. A search bar tops all three.

By default, the Xbox music app takes the user to his/hers own music collection. Immediately below is the Xbox radio streaming service - it requires a premium pass for ad-free listening and looks like a good alternative to Pandora. The Xbox music store is now listed under an Explore section.

Now playing shows the artist and name of the song along with an overview with Album name, Genre, etc. The interface offers animated album art, pause/play and skip controls. A swipe from the top or bottom edge of the screen reveals the music controls.

Xbox Video greets you with featured movies and TV shows. User's own videos are all the way on the left. A search button can be found on the top right side. It works for both the user's content, as well as the one sold in the Xbox store.

Watching videos on the Lumia 2520 is a real pleasure, thanks to the kickstand and 10.6" 1080p screen. The context menu offers repeat, previous, play/pause, next, and play to which lets you wirelessly stream the video to any DLNA-enabled device.

Xbox Games is the place to go for downloading games on the Lumia 2520. It carries over many features from the Xbox - from your avatar to your scores and achievements. Featured games will greet you at startup, in the same fashion as the video section.

The store shows Windows games, divided into new releases and genres. Each game has its own page complete with an overview and the option to buy.

Microsoft has improved a good deal in terms of available gaming titles for Windows 8.1 RT. Halo Spartan Assault is undoubtedly the most popular of the pack - it is exclusive to Windows devices for now (coming soon to Xbox 360 and Xbox One).

Playing a game on the Lumia 2520 is a breeze. The Snapdragon 800 chipset is top notch, so there were no issues whatsoever performance-wise.

The Nokia Lumia 2520 put a rather uninspiring performance in our audio quality test. When connected to an active external amplifier, the slate posted mostly great scores, but its frequency response left a lot to be desired. The volume levels were way below average, too, which is disappointing considering the available space.

Plugging in a pair of headphones doesn't introduce much distortion, but the stereo quality worsens and volume plunges even lower. Frequency response remains quite disappointing too for a pretty lackluster overall performance. 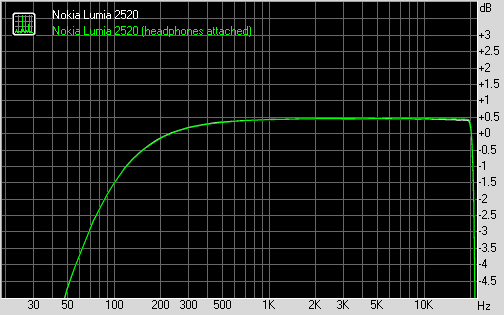