The retail package of the Lumia 520 hasn't got anything special but sees to it that the user's basic needs are met. Inside, aside from the mandatory leaflets, you'll find a single piece wired charger, a microUSB cable and a plain-looking set of headphones.

The retail package covers the basics

There isn't a memory card supplied but the phone has an ample 8GB of built-in storage to get you started.

The Nokia Lumia 520 is about the size of a Lumia 800 - another proof that smartphones have only been getting bigger lately. Four inches of diagonal is no longer too much even for the most basic of offerings. Anyway, what this means in practice is that the 520 has found room for a bigger screen in a body that's just a tad wider - but slimmer - than the Lumia 800's.

It's a reasonably compact device by modern standards and one that's easy to hold and operate with one hand. At 119.9 x 64 x 9.9 mm, the Lumia 520 is not the slimmest smartphone around but by no means too chubby either. It weighs the perfectly acceptable 124g.

Nokia has created a simple and sensible design that works equally well across their WP8 lineup. Of course, the finish varies from the flagship to the low-end but it's a consistent and recognizable styling that an entry level package is quick to take advantage of.

In a nutshell, the Lumia 520 is cheap without looking it. The curved shape and soft rubbery finish around back make for a handset that's got plenty of grip and style.

There's a hint at a unibody design, reinforced by the seriously sturdy feel of the phone, but the battery cover is actually removable - to get access to the battery, SIM compartment and memory card slot. The Nokia Lumia 520 lacks some of the refinement of a Lumia 720 but you wouldn't know either that you're dealing with the cheapest device in the range.

We have a black and a white Nokia Lumia 520 at HQ but the phone also comes in the more flamboyant red, yellow and cyan. Like the Lumia 820 sibling, the Lumia 520 offers exchangeable rear covers - wireless charging isn't an option though.

The display is hardly spectacular

The Lumia 520's screen doesn't use the ClearBlack tech and contrast is the biggest casualty. The display clearly lacks the punch of a CBD like the one on the Lumia 720. On a positive note, the viewing angles are quite good. 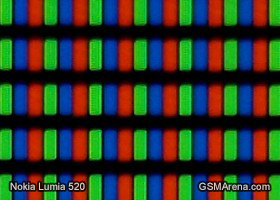 As you can see from the readings in our dedicated test the Nokia Lumia display isn't the brightest around and its contrast is far from great.


The glass above the Lumia 520's screen is quite reflective, which means the phone is barely usable when outdoor on a bright sunny day.

You can find more about our display testing process here.