Nokia's teaser from yesterday promised something big for today and it delivered, sort of. The Nokia Lumia 625 is an entry-level Windows Phone 8 handset with a rather big (for the class) screen – 4.7".

That's not groundbreaking, though as the WP7-powered HTC Titan had a 4.7" screen back in 2011. The Lumia 625 is mostly a stretched out 620 with some additional extras.

The Nokia Lumia 625 has a 4.7" IPS LCD with WVGA resolution (480 x 800, 201ppi) and "2.25D" curved Gorilla Glass 2 ("2.5D" has curved edges, we guess "2.25D" means less curvy"). The screen packs Nokia's proprietary image tuning options that let you change the color profile. It has super sensitive touch too, meaning it works with gloves and fingernails.

The Nokia Lumia 625 continues the WP tradition of having entry-level phones with fairly high specs (compared to Android's entry level). It packs a dual-core Krait processor at 1.2GHz, 512MB RAM and 8GB of built-in storage, expandable with a microSD card slot.

There's HSPA+ and 4G LTE connectivity, along with Wi-Fi b/g/n, Bluetooth 4.0 + LE and GPS + GLONASS for positioning. Nokia's HERE mapping suit is on board with HERE Drive beta (it gives you free offline GPS navigation for one country).

The main camera is a 5MP shooter that can capture 1080p video and the front-facing camera has VGA resolution. There's an LED flash and one HD mic. Other goodies include Smart Camera and FM radio, meaning the Lumia 625 comes with the Amber update. Free Nokia Music subscription is also included. 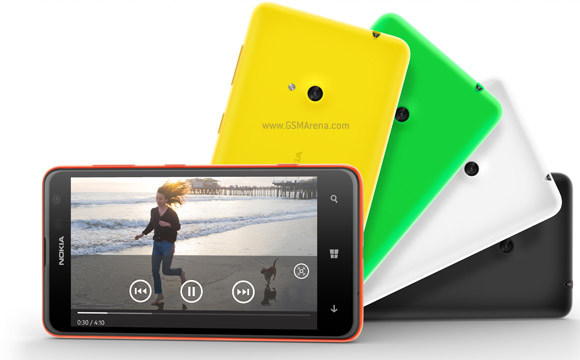 The Nokia Lumia 625 will launch in China, Europe, Asia Pacific, India, Middle East, Africa and Latin America in Q3 2013 in a variety of colors (orange, yellow, bright green, white and black), with exchangeable semitransparent shells to easily switch colors (just like the 620).

In the UK, the Lumia 625 is expected in September for £200 though EE, Vodafone and O2 as well as retailers Carphone Warehouse and Phones 4U. Elsewhere the price will be €220 before taxes and subsidies.

really? prove it - cause i can prove a video of the device browsing with few tabs open...in their desktop version of the website even.

Lumia 625 doesn't support the 4G bandwidth in india. So, it should cost less as compared to other countries