The Nokia Lumia 630/635s front is all black with two small dents - one for the earpiece above the display and one for the mouthpiece below the screen. There is no proximity or ambient light sensor, nor is there a front-facing camera for video chat.

The surprising lack of a proximity sensor isn't that much of a deal breaker - the screen has a way of detecting your ear pressing to it while you're in a call and dims out automatically. Even if it fails to do so, the on-screen call keys at the bottom are hard to accidentally hit anyway. This is a different solution from what the cheaper smartphones usually do - simply lock the touchscreen during a call. The solution works fine as far as we tested.

There is nothing on the left, while the right side has the volume rocker and power/lock key. Both controls are prominent enough to locate by touch, and have a solid press.

A peek at Lumia 630's left and right sides

The top of the Lumia 630/635 features the 3.5mm audio jack, while the bottom accommodates the lonely microUSB port used for charring and PC connections. Except from a handful of carriers, the Lumia 630/635 retail package omits a microUSB cable.

The top and bottom of the Lumia 630

Finally, the 5MP camera lens is at the back along with a small loudspeaker grille near the bottom. There is no LED flash.

Lumia 630 at the back • what's under the battery cover

Undoing the battery cover is a bit of a hassle, as it requires some bending and twisting of the phone. Once you pop it out, you'll get access to the microSIM slot (or a pair thereof if you opted for the dual SIM model) and the microSD card slot that supports up to 128GB cards. Unfortunately, neither is hot-swappable - you'll need to get the battery out to gain access.

Update, July 31: After we published the review, we spotted discrepancies in the methodology used for our testing so we re-tested the phone and it came up way better. Below are the amended test findings, which are noticeably better than before.

Nokia Lumia 630 is powered by a 1,830 mAh battery. According to the official stats it should be enough for about half a day 3G talks and 25 days on stand-by. Naturally, we've completed our battery test and the results are in.

The Lumia 630 is capable of lasting half a day on call, but this is possible only if the clever ear-sensing tech inside the screen has detected your ear and has turned itself off. Since the phone doesn't come with a proximity sensor the display doesn't go off unless you touch it with your face or you turned it off manually. If the screen is kept on during your calls, you should probably expect significantly lower talk time. 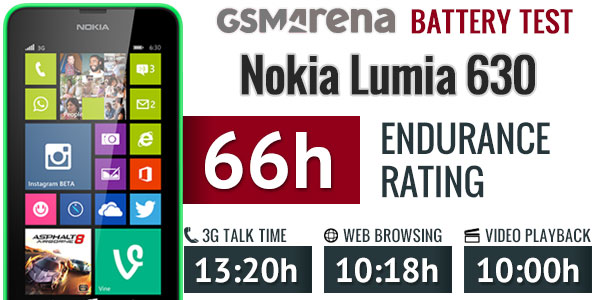 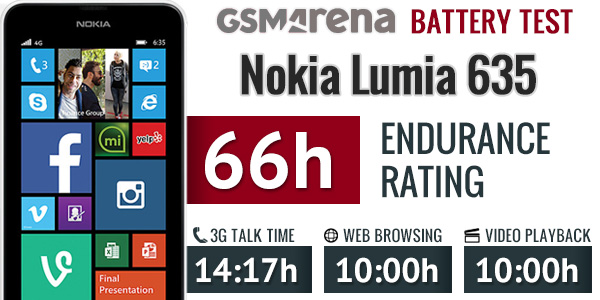 Both the Nokia Lumia 630 and 635 garnered respectable scores in our test, especially given the low capacity battery. For both devices, the overall endurance rating came in at 66 hours. It is an above average score, meaning each phone will last almost three days if you used it for an hour of video playback, an hour of calling over a 3G network and an hour of web browsing daily.

The Nokia Lumia 630 is available in both single SIM and dual SIM versions. The LTE version is known as the Lumia 635 - it sounds like a separate phone but the only difference is 4G network support. Here's the list of supported bands by model:

If you opt for the dual-SIM Lumia 630 model, you'll get two microSIM beds with dual stand-by. Of course, once you're in a call on one of the cards, the other SIM becomes inactive.

The rest of the connectivity features available across all models include single-band Wi-Fi b/g/n, Bluetooth 4.0, GPS with GLONASS, and an FM radio with RDS. There is a microUSB 2.0 port for charging and data connections. Mass storage mode is supported for access to the phone's built-in memory and microSD card.

There is no TV-out functionality under any form - neither wired, nor wireless. Also currently, there are no Windows Phones that support USB On-the-go, so that's missing, too.