Smack in the middle

Like its better equipped sibling, the Nokia Lumia 710 comes in a fairly large box. As far as contents go however, there are no surprises. Inside the box, you will find the phone, a charger and microUSB cable, as well as a set of nice earbuds. Several booklets are also present.

The retail box of Nokia Lumia 710 • the bundled headphones

Additional accessories such as changeable colored back panels and a case would have certainly been a welcome addition to Lumia 710's box. Even in its current state however, it will have your most essential needs covered.

While the Nokia Lumia 800 is essentially a clone of the Meego running N9, the Lumia 710 copies some pages from the Symbian design book. It's easy to spot a resemblance to the Nokia C7. In a world where generic designs are becoming more and more common, the Lumia 710 still manages to look different - and unmistakably Nokia.

Here is the Nokia Lumia 710, compared to one of its direct rivals - the Super AMOLED packing Samsung Omnia W.

Despite the all-plastic construction, the Nokia Lumia 710 feels extremely well put together. We can't help but note though, that the phone looks a bit cheap next to its metal clad Samsung and HTC rivals.

There are two color schemes available for the device - black and white. Interestingly enough, the main color refers only to the front of the device. Meaning you can choose between a black and a white body. On top of that, there's a selection of exchangeable rear covers in various colors.

The Nokia Lumia 710 features a ClearBlack LCD screen of WVGA resolution. With a pixel density of 252ppi, the display is as good as it gets on a Windows Phone handset. Its contrast and viewing angles are better than most typical LCD units we've covered, but fall seriously short of AMOLED standards. We also found the screen of the Lumia to have a more or less annoying yellowish tint when viewed from an angle.

The ClearBlack LCD screen of the Nokia Lumia 710

The Nokia Lumia 710's screen showed impressive contrast ratios of over 1000:1, but most of that was due to the relatively high brightness of the screen (nearly 700 nits at maximum). The black levels were pretty good for a mid-range LCD-packing phone.

Here's how the Lumia 710 stacks up against the competition.


Below the screen, you will find the three typical Windows Phone buttons, which look like one giant hardware key. In a rather interesting fashion, the mouthpiece is also located on the front, below the display, rather than on the bottom side of the phone.

Above the screen is where the earpiece ambient light and proximity sensors reside. There is no front-facing camera on the Lumia 710.

There is nothing but a small latch for removing the battery cover on the left side of the Lumia 710. On the right side, you will find the volume rocker and the dedicated camera button of the device. It's a shame the half-press is nearly nonexistent. It will take quite some practice to get it right. The half press is very shallow, and the key itself is rather stiff. With almost no clear stop between half and full press we ended up with plenty of unusable shots before we finally hit the right amount of gentle pressure needed. Touch focus is available too but we're not particularly fond of it since it also snaps the image, so focusing and recomposing is not possible.

At least, the camera key on the Nokia Lumia 710 will power up the camera even when the phone is locked. It's fairly quick too.

On top of the Lumia 710 is where the unprotected 3.5 mm audio jack and microUSB ports are. The power/lock key is there as well. There is nothing but a lanyard eyelet on the bottom of the device.

On the matte plastic back of the Nokia Lumia 710 is where the 5MP camera and LED flash can be found. The loudspeaker grille is there as well.

The back of the Nokia Lumia 710

When you remove the battery cover, you will find the battery and the microSIM slot - no surprises there.

No surprises under the battery cover

The Nokia Lumia 710 scored an endurance rating of only 27 hours in our battery test, which was fairly disappointing. It managed just over 9 hours of 3G talk time, beating both the Lumia 800 and its official rating, but it failed to break the 4 hour barrier in both the video playback and the web browsing test. You can get more details on how the Lumia 710 did from our blog post. 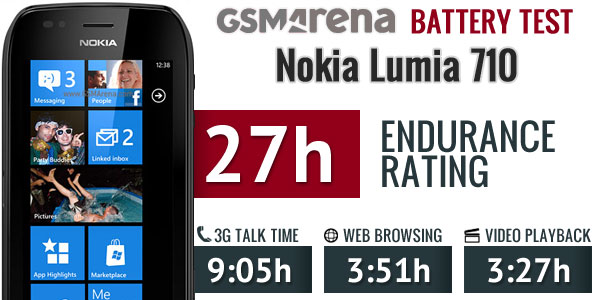 Nokia smartphones have always been a pleasure to handle and the Lumia 710 is no exception. The matte plastic cover on the back is quite grippy and helps you avoid accidental drops. With its pocket friendly measures, the phone can be operated easily with one hand as well.

Overall, we found little to frown about the smartphone's build quality. The design is rather simple but likely to appeal to a wide audience of potential users. The interchangeable back covers should help its cause even further.

It is now time to take a look at the software secrets of Nokia Lumia 710. Don't expect to find any surprises here though - the device is absolutely identical to the Lumia 800.