Nokia Lumia 710 announced for US, live shots inside

Nokia has just announced the T-Mobile USA version of the Windows Phone 7-based Lumia 710. It was supposed to be unveiled on a special event tonight in New York, but Nokia spilled the beans earlier.

The US version of the Lumia 710 is the same as the one announced back in October - a 3.7-inch ClearBlack WVGA display, a 5 megapixel camera with HD video recording, 8GB internal storage and the usual connectivity options. The Lumia 710 is based on the MSM8255 Snapdragon platform featuring a 1.4GHz single-core processor, Adreno 205 graphics and 512MB RAM. 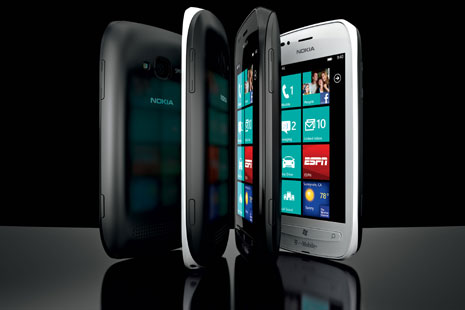 Nokia Lumia 710 runs on the latest version of Windows Phone - 7.5 Mango - and comes with free life-time maps and navigation.

Update: We just got back from a glitzy party in New York City, hosted by Nokia and T-Mobile, where we got a chance to go hands-on with the Lumia 710.

The device will hit the shelves in black or white color scheme. Oddly enough, the white version will ship with a black battery cover. We were told by the representative that different colored covers will be sold separately.

Here are the hands-on photos:

T-Mobile USA is going to launch the phone on January 11 next year. It will cost $49 after rebate on a two-year contract with a call and data plan.

lumia 710 is not atall a good phone. the call doesnt end instantly while pressing the button. also the nokia care people say its in your mind, the phone is ok. i reccommend to think before buying 710 lumia.

Woull have it alreadz its called Nokia 603, almost the same desing as lumia 710 its not running MeeGo though but symbian belle ... for meego youll have to go for N9

Just look at nokia 603 dude.. It have the same design and body.. Most importantly it run symbian belle