Nokia Lumia 710 bound to a January 6 release in the UK?

The Nokia Lumia 800 has been available in the UK since last month and now all eyes are on its fellow Lumia 710, which shared the same stage at Nokia World couple of months back. 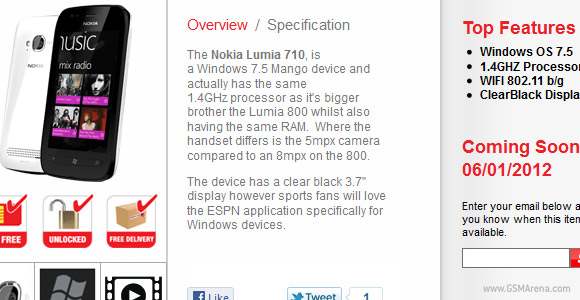 Back then Stephen Elop announced that the Lumia 710 will be broadly available in the first quarter of 2012 and, while we all hoped its launch stayed in the boundaries of this year, we might see it hit stores in the first days of January. That is according to UK online retailer Digital Phone, which has marked the Windows Phone Mango smartphone to become available on January 6.

Don't get your hopes too high, though, as this could turn out to be just a blindshot, as neither Nokia has confirmed the date, nor other online retailers have put particular dates on the device just yet. Pricing on the Lumia 710 is still anyone's guess, but first things first, let it first launch and talk prices afterwards.

Not really. This has almost the same specs as the 800 apart from the camera and screen...and less for way cheaper. In markets like India (where Nokia stands a LOT to gain), that makes a huge difference and I actually expect more 710s to sell t...

not like that frnd bt is one of option, thats al apart frm that every thing is gud people u wanT bluetooth trancefer sure na get one cheaper one like x2 or c1.01