The controls layout is pretty consistent among Windows Phone 8 smartphones and the Lumia 720 makes no exception.

Above the screen you will find a discreet earpiece, the ambient light and proximity sensors, as well as the front-facing camera.

The front-facing camera is next to the earpiece

Below the screen are the three touch-sensitive buttons for getting around the Windows Phone 8 UI. The microphone pinhole is also here.

The usual three-button combo sits underneath the screen

The sole element of interest on the left side of the Nokia Lumia 720 is the microSD card slot. It uses a rather unconventional design with a tray, which is operated with a clip, instead of the usual cap over a pop-up slot.

The microSD card slot has a pretty unorthodox design

Things get busier on the right, where the volume rocker is located, along with the power/lock key and a dedicated camera button. The latter would launch the camera even if the phone is locked. All three keys sit relatively low and don't provide the best feedback, but don't really pose too great usability issues.

The 3.5mm audio jack is located on the Nokia Lumia 720's top, alongside the micro-SIM card slot.

The micro-SIM tray and the 3.5mm audio jack

Moving on to the bottom of the phone, we find the microUSB port and the primary microphone.

The primary microphone sits next to the microUSB port

The back of the device is where the Carl Zeiss lens for the 6.1MP can be found. Alongside it sit the LED flash and the secondary microphone. There are three small metal connectors lower down the back panel, which let you connect the optional wireless charging cover.

The camera has Carl Zeiss-certified lens

The final element at the back is the loudspeaker grille, which is placed in the bottom left corner.

The wireless charger cover connectors and the loudspeaker

Unfortunately, the unibody construction of the Nokia Lumia 720 means that there's no way for you to access the 2,000 mAh battery, which is located under the back panel. The battery itself is rated to last for 520 h of stand-by or 13 h 20min of talk-time on 3G networks, which sounded rather optimistic given its moderate capacity.

Much to our surprise, though, the Lumia 720 even exceeded its talk time rating in our dedicated test. The smartphone managed a really impressive 60h endurance score, which means you will only need to charge it every two and a half days if you do an hour of talk time, video playback and web browsing per day. 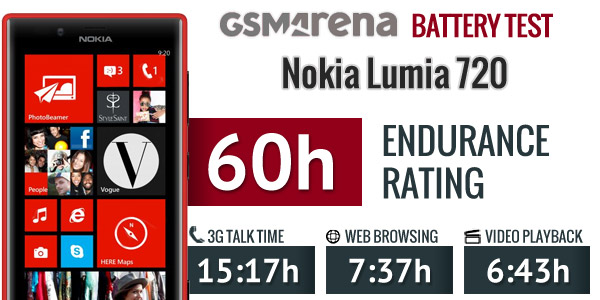 You can find the complete breakdown of the battery test over here, while more information on the testing procedures can be obtained right here.