A successor to the Nokia Lumia 720 released in early 2013 is in the works over at Microsoft's mobile division. It's bound to be called Lumia 730, and it's apparently the handset we've known so far only by its codename - Superman.

Today the first two images showing it have been leaked, and you can see them below. 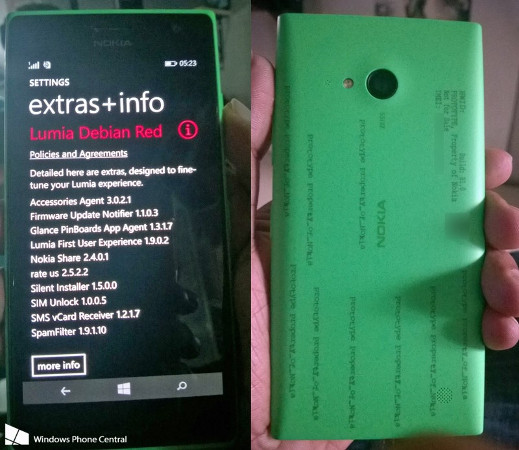 The Lumia 730 will be a mid-ranger focusing on selfies, according to past rumors. It should sport a 5 MP front camera for that purpose. It will feature a 4.7-inch 720p touchscreen and a 2000 mAh battery.

At the helm will be a 1.2 GHz quad-core processor, aided by 1GB of RAM and 8GB of internal storage. The rear camera may come with the funky resolution of 6.5 MP.

As you can see, the Lumia 730 is running a software version called Lumia Debian Red. This may be what Nokia's next Windows Phone update ends up being called (following Cyan), or it could just be a codename for that - as Cherry Blossom Pink was to Cyan and Bittersweet Shimmer was to Lumia Black. These names all go in alphabetical order, though, so the D release is the next one after Lumia Cyan, that seems to be clear.

Microsoft is also prepping a Lumia 830 for the near future, and this has been pictured already. These two models could be announced at the same time, and that might actually happen pretty soon, given the fact that Stephen Elop has already reportedly showcased them inside his company.

Is any data connection shortcut or ON OFF available in quick action, notification area?