It was just yesterday when the first two photos showing the upcoming Nokia Lumia 730 got leaked, and today we get to see another color version of the same device. While the original pictures were of a green model, this time you can feast your eyes upon a render of the one that's going to be bright orange. 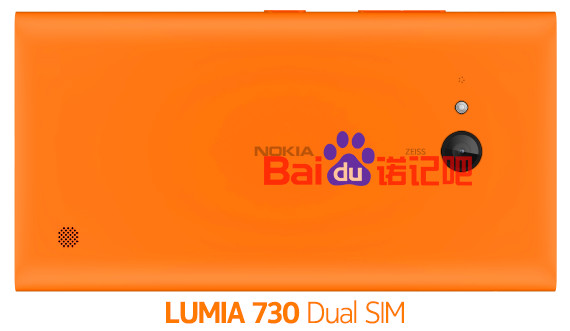 The Lumia 730 is codenamed Superman and its main claim to fame will be the 5 MP front-facing camera, which will allow Microsoft's mobile division to position it as a selfie lover's dream.

Apparently though it will also get a dual-SIM variation, which will certainly be good news for those of you who depend on that particular feature.

The Nokia Lumia 730 should come with a 4.7-inch 720p touchscreen, a polycarbonate unibody construction, a Zeiss-branded 8 MP rear camera (so not 6.5 MP after all, thankfully), as well as on-screen software buttons.

It's due to be powered by a Qualcomm Snapdragon 400 chipset with a 1.2 GHz quad-core CPU, aided by 1GB of RAM and 8GB of internal storage. Keeping things juiced up will be a 2000 mAh battery, and the handset will run Windows Phone 8.1 Update 1 from day one.

The Lumia 730 may be launched by Verizon first before the end of August, and could later arrive in other places too.

Guyz can any 1 tell m about its battery backup?

I shifted to lumia 730 from Samsung Grand because of office application, but so much problem in lumia, My Office old excel file can not edit, word file can not save, saying read only file, I m fade up, tmrw going to Nokia care, lets see what they do.