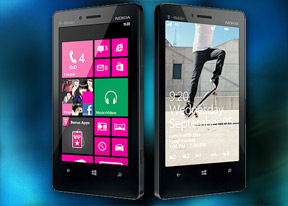 Retail packages of US market smartphones have hardly been dreamy lately and the Nokia Lumia 810 is no exception. Inside the T-Mobile branded box you will find a charger and a USB cable - nothing else.

The retail package of the Lumia 810

None of Nokia's recent US offerings boast a generous retail package and the 810 is no exception. You will have to spend your own dime on some essential accessories such as headphones and a microSD card.

Nokia Lumia 810's design is somewhat polarizing. Some might find the phone pleasantly understated with its black color scheme and soft-edged rectangular shape. Others might argue that the handset looks plain dull, particularly when compared to its Lumia 920 and 820 siblings. We reckon that, on this instance, looks will boil down to strictly personal preferences.

The handset's looks are polarizing

Build quality is unsurprisingly up to Nokia's usual high standards. The Lumia 810 finished in soft-feel plastic with the handset's front covered in Corning Gorilla Glass 2 - build quality is on a nice level.

Despite being almost identical to the Nokia Lumia 820, save for the bigger battery, the 810 has shaved some weight before donning T-Mobile's branding. The smartphone's measures are 127.8 x 68.4 x 10.9 mm, while its weight tips the scale at 145 grams.

AMOLED displays and Windows Phone OS make for a perfect marriage couple and the Nokia Lumia 810 is no exception. This is not the first time we've come to experience the 4.3" WVGA unit if the smartphone - it is also featured in the Nokia Lumia 900 and the Lumia 820.

The display is a familiar sight

Despite having a relatively modest resolution by today's standards, the ClearBlack AMOLED display of the device is more than adequate for all tasks. It doesn't have a PenTile matrix, so it is reasonably sharp, while staying gentle on the battery life.

Above the screen you will find the earpiece, the ambient light and proximity sensors, as well as the front-facing camera. Below the screen are the three touch-sensitive buttons for getting around the Windows Phone 8 UI.

The left and right sides of the Nokia Lumia 810

The 3.5mm audio jack is located on top of the device. A secondary microphone is keeping it company. The bottom of the Nokia Lumia 810 is home of the microUSB port, as well as a pair of iPhone-like loudspeaker grilles.

The view on top and bottom

The back of the device is where the 8MP camera lens and dual LED flash can be found. The Carl Zeiss certified lens is set within a glossy black plate which makes for a nicely subtle addition to the matte battery cover.

A quick look at the back of the device

In order to open the Nokia Lumia 810's battery cover, you have to force a finger nail in the thin gap and carefully undo the stops and pull the cover from around the phone's inner body. It takes more effort than on other phones, but the upside is there're almost no visible gaps, which benefits the overall looks of the smartphone.

Under the battery cover, you will find the microSD and microSIM card slots, which sit on top of each other, as well as the beefy (for a WP device) 1800mAh battery.

A peak under the battery cover

The extra 150mAh bode well for the 810's performance in our battery test. The handset achieved an endurance rating of 48 hours. This means that the T-Mobile offering will make it through two full days of use, should you make an hour each of telephony, web browsing, and video playback daily. With the battery also being user replaceable, we reckon that the Nokia Lumia 810 can be quite independent from power outlets. 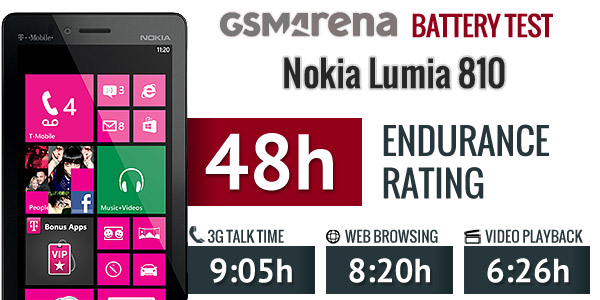 Handling the Nokia Lumia 810 feels great. The matte plastic feels grippy, so accidental drops are not likely. The reasonably sized 4.3" display allows one-handed use on most occasions.