Nokia Lumia 820 is now on sale in the UK

With Windows Phone 8 now officially released, everyone is looking at Microsoft's partner to unlock the potential of the new platform. We already know that we should expect to see the first WP8-powered smartphones in the next week, so it's time we learned pricing specifics.

Carphone Warehouse has released the info about the Nokia Lumia 820 in the UK. The smartphone outlet is offering the device SIM-free for £379.95. 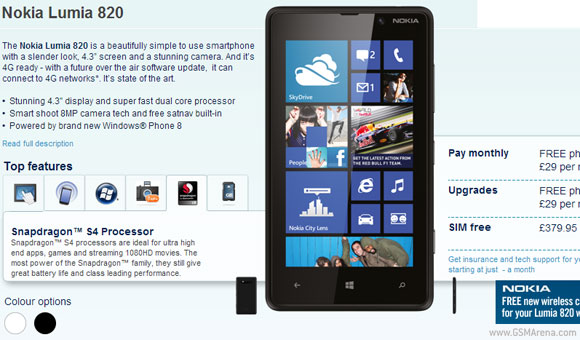 Other major UK stores such as Expansys and Phones4UK have the Lumia 820 up for pre-order, but they haven't revealed the asking price just yet.

As you'd expect, the WP8-running handset it also offered with various plans for O2, Vodafone and Orange. The latter gives you the device for free with a £31/month plan including 750MB of data and unlimited texts.

The device is already on sale in Germany and has started shipping in Europe.

You're right, Nokia is the best

when lunch me bye this pphoneeeeeeeee

ya this mobile is rely nice