Nokia Lumia 900 for AT&T review: Going all in

Inside the white/orange colored retail box of the Nokia Lumia 900, you will find a charger, a microUSB cable, as well a small key for removing the microSIM tray.

A bundled headset would have certainly been a welcome sight in the Lumia's retail box. Given the phone's $99 price tag however, not having one bundled is hardly a surprise.

Currently, the handset is being offered with two color schemes - black and cyan. White and magenta flavors however, are more than likely to arrive soon.

Build quality is flawless, save for a couple of minor areas, which we'll tell you about in a bit. The Nokia Lumia 900 appears ready to take a lot of abuse, as it is a blend of polycarbonate and Corning Gorilla Glass. As a Nokia rep would be happy to tell you, the body is not painted the old fashioned way but it's rather made of this plastic that has the same color in depth, scratches and marks from accidental drops won't not stand out as much.

We've always said that AMOLED screens and Windows Phone OS are a perfect match. The Nokia Lumia 900's display is yet another proof of this fact. The 4.3" unit of the handset impresses with infinite contrast ratios and deep blacks. In a manner befitting a Windows Phone flagship, Nokia Lumia 900's screen has dropped the PenTile matrix, found in the unit of the Lumia 800, so, despite its lower pixel density on paper, it is nicer to look at from up close.

The screen is a major improvement over Lumia 800's unit

Above the screen you will find the rather stealthy earpiece, the ambient light and proximity sensors, as well as the front-facing camera. Below the screen are the three touch-sensitive buttons for running the Windows Phone operation.

There is absolutely nothing on the phone's left side. Things get a bit busier on the right, as it is the home of the volume rocker, the power/lock key, as well as the dedicated camera button. All three felt somehow less solid than the rest of the Lumia 900.

Nothing on the left • the buttons on the right feel flimsy

There is a lot going on top of the Nokia Lumia 900. The 3.5mm audio jack is there, along with the microUSB port and a secondary microphone for active noise cancellation. The microSIM tray is tucked in there as well. It feels gentle when handled, so use caution when dealing with it.

The view on top • the microSIM tray is quite gentle

On the bottom, you have the loudspeaker grille machined into the polycarbonate body. The mouthpiece is hidden there as well.

The loudspeaker at the bottom

On the back of the device is where the 8MP camera and LED flash can be found. A Carl Zeiss livery is also to be found there, suggesting the camera lens quality is if high standards.

The camera unit on the back

The battery on the Lumia 900 is non-removable. In terms of battery life, the phone offered a far from impressive showcase. With 1830mAh on tap, the Nokia Lumia 900 managed an endurance rating of 29 hours in our battery test. This means that you will need to recharge your device every 29 hours if you use it for an hour each of telephony, web browsing, and video playback every day. 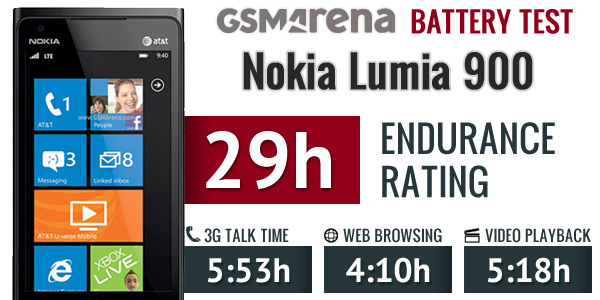 If you are cautious enough, you can make it through a full day with the Lumia 900 on a single charge. If you are a power user though, consider carrying a charger on you. Thankfully, the one in the retail bundle is very compact.

Handling the Nokia Lumia 900 is a real pleasure. The device's side curves allow it to fit perfectly in your hand. Accidental drops are also not very likely, because the polycarbonate surface provides for a great grip.

So to cap it all up, the Nokia Lumia 900 looks fantastic, and is well put together. Battery could have certainly done a better job, but this is the case with most LTE phones today.

We are now going to take a closer look at Windows Phone 7.5 Mango and the Nokia software goodies, which come with it.