Nokia Lumia 900 connectivity fix gets outed ahead of schedule

In a truly remarkable display of customer care, the folks at Nokia have managed to out the software fix to Lumia 900's connectivity issues already. That's only two days after the Finnish company acknowledged the problem's existence, and an impressive three days earlier than promised. 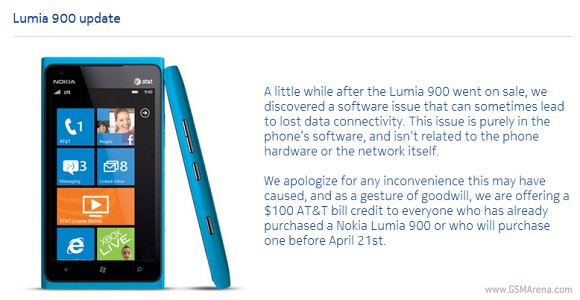 The software update can be applied via Microsoft's Zune software. In case you don't feel like dealing with USB cables and such, you can also exchange your Nokia Lumia 900 at any AT&T store free of charge as well.

And by the way, Nokia and AT&T are still going to give you a $100 bill credit if you purchase a new device between now and April 21st as a goodwill gesture, thus making it free on a contract.

So great, such a gorgeous phone, fastest on the market, free navigation, Nokia Drive, free music Nokia Music, clearblack display, a bigger screen than the ridiculous now iphone, and It is free until 21 04 12! dream! I'm gonna buy it, straight away!