A yet to be announced Nokia Lumia 910 has appeared at a Dutch online retailer. The device sports a spec sheet, quite similar to the U.S. exclusive Lumia 900, save for the lack of LTE radio and the presence of a massive 12MP camera sensor on board - a first from Nokia since the highly revered N8 came into being. 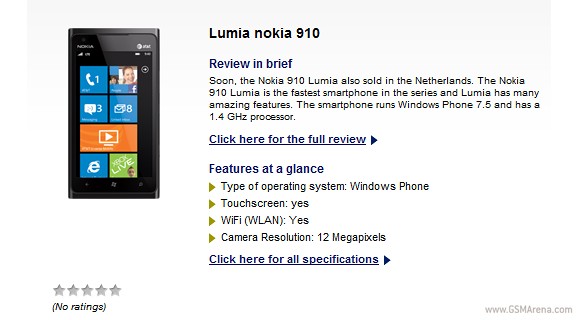 There is no launch date available for the device on the retailer's webpage. A sign-up form though is present - just like in the case of Lumia 900's short lived, alleged UK availability from earlier this week.

While having a global version of the Lumia 900 sans the LTE radio makes quite a bit of sense, given the low availability of LTE networks outside the United States, keep in mind that we might be witnessing yet another round of speculation on the subject. The AT&T Lumia 900's picture used by the retailer certainly points in this direction. A pinch of salt therefore, is highly recommended.

Yes, a Nokia WP7 phone based on the E7 would be fantastic. WP7 really needs some QWERTY phones.