Microsoft keeps a pretty tight control over the hardware of Windows Phone devices, so understandably the Lumia 920 brings little surprises here. Above the screen you will find the earpiece, the ambient light and proximity sensors, as well as the 720p front-facing camera.

The ambient light sensor, the earpiece and the proximity sensor sit on top

Below the screen are the three touch-sensitive buttons for getting around the Windows Phone 8 UI. These are probably the most generously spaced capacitive keys in business. That and the extra space below them will be much appreciated for allowing an extra solid grip of that big and heavy handset. Two-thumb typing in landscape is quite comfortable and the thicker phone body allows a secure hold. So really, what's a disadvantage in terms of good looks, actually works in favor of comfortable handling.

The usual set of keys lies below the screen

The left side is perfectly bare

At the top you get the 3.5mm audio jack, the secondary microphone and the microSIM tray. You'll need the SIM eject tool supplied in the retail package or another suitable sharp object to release the tray, but that's often the case with microSIM-packing devices, so we won't be deducting any points here.

Moving on to the bottom of the phone we find the microUSB port, which is flanked by the loudspeaker and the primary microphone. The setup looks like a pair of speakers but one of the identical grilles is actually a mic.

A look at the Lumia 920 bottom side

The back of the device is where the 8MP Carl Zeiss-certified camera lens and dual LED flash can be found. The lens is set within a chrome plate that's a tasteful accent on our black test unit and it's the only fingerprint-attracting element on an otherwise smudge-resistant smartphone.

The Carl Zeiss lens at the back

Unlike the Nokia Lumia 820, the Lumia 920 doesn't have a removable battery cover, which means you can't access or replace your battery. The 2000 mAh unit inside is said to last for up to 10 hours of talk time or 400h of stand-by on 3G networks, but if its endurance is not enough for you, you'll have to carry either an external juice pack or a battery case - both of which are pretty awkward and uncomfortable.

The good news is that the Lumia 920 did pretty well in our dedicated battery test and achieved an endurance rating of 44h, which means it will last for nearly two full days if you do an hour of calls, an hour of video watching and an hour of web browsing per day. 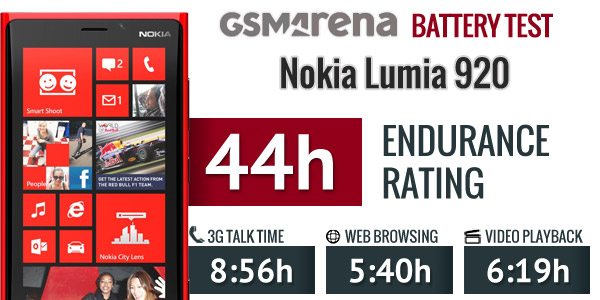 The complete test is to be found here. You can find more about what we test and how over here.

Another sacrifice mandated by the unibody design is the lack of expandable storage. While the more modest Lumia 820 offered you the option to cheaply increase its storage capacity via the microSD card slot, the Lumia 920 flagship is stuck with what it has built-in. Luckily, 32GB should be enough for most users.

The Nokia Lumia 920 has superb in-hand feel and is built to last. Weighing the substantial 185g, single-handed operation isn't as comfortable as that of a Lumia 820, but most tasks can still be carried out at with reasonable ease. The smartphone's curved sides and display benefit the handling quite a bit.