The retail package of the Nokia Lumia 925 is a pretty standard deal. Inside the moderately-sized box you'll find a USB cable, an A/C adapter and a headset of a seemingly high quality. We've certainly seen worse in the retail boxes of the Lumia 925's competitors.

The other items inside the box are a bunch of leaflets and the SIM eject tool, which can be hooked up to a keychain.

At 129 x 70.6 x 8.5 mm the Nokia Lumia 925 is far thinner than the Lumia 920. The 2mm slimmer pofile makes all the difference in the world, making the phone much more comfortable to hold and carry around. We dare say it's exactly what the Lumia 920 should've been in terms of feel and weight.

Nokia has been favoring polycarbonate unibody as the design of choice for its high-end phones, including the latest Lumia 1020. This makes the Lumia 925 the odd one out - it's the first Nokia phone in a while to feature aluminum accents. The latter, combined with the new AMOLED screen, has helped reduce both the phone's thickness and weight.

As a result, the Nokia Lumia 925, which tips the scales at 139g, is a long way down from the awe-inspiring 185g of the Lumia 920. The updated version is nowhere near as great a burden to carry around. Needless to say you won't be getting sore hands after a long call either.

In terms of looks, the Nokia Lumia 925 is closer to the Lumia 720 than the 920. It's a rectangular phone with rounded sides and a tapered back to hide some of the thickness. The sides are made of exposed aluminum, while the back is polycarbonate with a kind of rubberized finish to it. This provides a bit of extra security when holding the phone.

The metal vs. plastic debate has been heating up in Android land, but the Lumia 925 is somewhere in between. It's not a bad choice as Nokia's polycarbonate has always been top notch and the aluminum still gives a solid, premium feel.

The aluminum also has another function - it serves as an antenna. The antenna in the grame design became infamous with the iPhone 4, which suffered from the so-called "death grip". That's when touching the metal would compromise reception.

Nokia has promised that the Lumia 925 is immune against it and, indeed, we didn't experience any signal drops. No matter how hard we tried, the phone didn't suffer any signal loss. Kudos to Nokia for pulling that one off.

The polycarbonate on the back has a soft touch finish and will come in three different colors at launch - White, Grey and Black. This propensity for monochrome is uncharacteristic of the Lumia line, which favors bright colors like Red, Yellow or Blue. It's durable and not prone to scratches, which is good, because it ultimately means you won't need to wrap the phone in ugly cases to protect it.

The Lumia 925 has a fairly thick bezel

The Lumia 925 is wider than most phones with 4.5" or so screens - the bezel is pretty thick and the screen has 15:9 aspect ratio, making it wider to begin with. It's also taller than usual, but at least that leaves enough room around the capacitive keys to prevent accidental touches (which are not uncommon on the Samsung Galaxy S4 and others).

That affects the handling - it's certainly not a deal-breaker (it's on par with the Lumia 920), but narrower phones are more comfortable to hold. Pocketability, however, has soared in part due to the reduced thickness but mostly because of the lower weight. 185g is phablet kind of weight, while 139g is virtually the same as the iPhone 4S which many people carry in their pockets without complaint.

We should note that the Nokia Lumia 925 lost some body fat by dropping the wireless charging support of the Lumia 920. You can add that back with a thin back cover that connects to the three pogo pins above the loudspeaker. Nokia has not announced the combined thickness or weight of phone + cover.

For its latest iteration of a Windows Phone flagship - the 925, 928 and 1020 - Nokia chose AMOLED over LCD. AMOLEDs have a number of advantages over liquid crystals - deeper blacks and better contrast, lower power usage in some scenarios (especially on WP, where most of the time the background is black) and great viewing angles.

The display on the Nokia Lumia 925 is a 4.5" AMOLED of WXGA resolution (768 x 1280), which is the maximum the OS supports at the moment. The display has 332ppi density and its matrix has a PenTile arrangement. That's not ideal, but at that kind of density you will need to look long and hard to tell the difference. It does become a tad more obvious if you put the Lumia 925 next to a 1080p Android flagship, though. 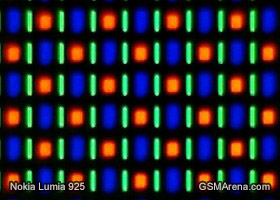 The Gorilla Glass 2 covering the screen is slightly beveled at the edges, which makes it fit better with the aluminum frame around it. This makes swipes from the side of the screen (common in WP) more comfortable.

The screen has excellent contrast thanks to the deep blacks. That's typical for AMOLED but what isn't is high brightness. Nokia advertises 600nits, which is slightly higher than we measured, but this is still one of the brightest AMOLED screens around.

Sunlight legibility turned out very good, with the Lumia 925 landing amongst the top devices in our chart.

Another common complaint about AMOLEDs is the colors - too saturated for some people's liking. The Nokia Lumia 925 has an extra setting allowing the user to choose one of eleven saturation levels.

The color temperature option is great too - it has 11 settings and goes from cool through neutral to warm. On LCD phones you're usually stuck with either a cool screen or a warm screen, depending on your preference it's either good or bad, it's a matter of luck hitting the right one. Having control over that takes chance out of the equation.

The AMOLED display on the Lumia 925 is laminated to the Gorilla Glass 2 and that reduces screen glare (some of which is caused by the air gap between glass and screen). Nokia's proprietary ClearBlack tech reduces glare even further and the 925 has one of the best screens in terms of sunlight legibility.

The screen on the Nokia Lumia 925 uses the Super sensitive touch technology that debuted on the 920. It can respond to fingernails or car keys, and will detect touches even if you're wearing gloves. You can set the sensitivity to Normal or High and we found even the Normal setting to be capable of working through thin gloves and responding to fingernails.

Nokia's tweaks to the display don't end there - a feature called Glance displays a clock on the lockscreen while it's off (like on the Symbians of yore). That doesn't waste a lot of energy due to the nature of AMOLED and by default it's set to turn the screen completely off after 15 minutes.

Nokia's Glance feature makes it easy to check the time. There's an option to leave it always on (or turn it off completely) and to dim the clock's brightness in a certain interval (it makes it more comfortable to look at in the dark).