The Microsoft requirements for a Windows Phone mean there's little variation in terms of controls across the product range.

The Nokia Lumia 925 is no exception. It has three capacitive keys below the display - Back, Home and Search. At the bottom of the glass covering the screen is the mic pinhole.

Above the screen is the 1.9MP front-facing camera, the ambient light and proximity sensors, and the earpiece.

Three capacitive keys below the screen • standard sensors above it

It's the right side of the phone where it gets interesting. Here are the volume rocker, the Power/Lock key and the two-step camera shutter key. They are all made of aluminum and have uniform width, all of them are on the thin side but prominent enough to locate by touch and press.

The Power/Lock key can be used to wake up the screen, but you can also do that with a double tap a la Nokia N9 (even the new Asha 501 does this). Another way to unlock the Nokia Lumia 925 is to long press the shutter key. There's an option to either start the stock WP camera or Nokia's custom Smart Camera (which we'll cover later).

The top of the phone is quite busy with the microSIM card slot, the microUSB port, 3.5mm audio jack and the secondary mic pinhole. The microSIM card goes in a tray which takes an ejector to open. There's no microSD card slot here and the Lumia 925 doesn't have a third microphone.

The left and bottom sides of the phone are left completely bare.

Nothing on the left or on the bottom

We leave the aluminum side of the Nokia Lumia 925 to get to the polycarbonate back. There's a bulge around the lens, which was inevitable considering the elaborate imaging setup. The Lumia 925 has a six-element (vs 5 for the Lumia 920) F/2.0 aperture Carl Zeiss lens, the Optical Image Stabilization mechanism and an 8.7MP image sensor.

Above the camera lens is the dual LED flash that doubles as an AF assist light and video light too.

The positioning of the camera makes it easier to hold the phone when taking a photo - with phones that have their cameras too close to the top edge you always run the risk of your finger getting in the way.

The PureView camera on the back along with dual-LED flash, loudspeaker and pogo pins

Hidden below the polycarbonate back of the Nokia Lumia 925 is the 2,000mAh Li-Ion battery. The back cover isn't user-removable, which means you can't access or replace your battery. It's the same capacity as the battery of the thicker Lumia 920, but we've seen thinner Androids pack bigger batteries.

The 2000 mAh unit inside is said to last for up to 10 hours of talk time or 400h of stand-by in 3G networks, but if its endurance is not enough for you, you'll have to carry either an external juice pack or a battery case - both of which are pretty awkward and uncomfortable.

In our test the Lumia 925 posted an endurance rating of 43h, which is an about average score. It can withstand quite a lot of talk time, but its web browsing endurance is only average and its video playback wasn't much better either. 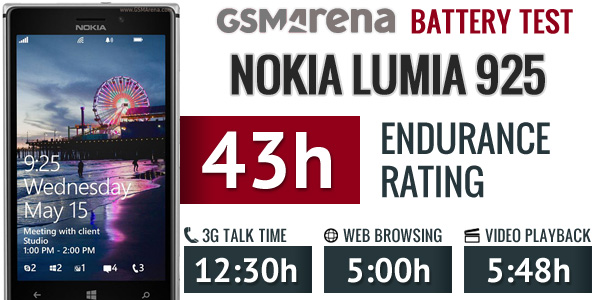 You can find more about what we test and what exactly these score mean over here.

Another shortfall of the Lumia 925 that it shares with its unibody siblings is the lack of expandable storage. While the more modest Lumia 820 offers you the option to cheaply increase its storage capacity via the microSD card slot, the Lumia 925 is stuck with what it has built-in. Luckily, 32GB, which should be enough for most users. Microsoft and Nokia also provide you with 7GB of free SkyDrive cloud storage.

The Nokia Lumia 920 had a great feel in the hand, despite its bulk. Naturally, the Lumia 925 with its more premium aluminum frame feels even better. With the weight loss also taken into consideration, one handed operation doesn't feel like a chore. The smartphone's curved sides and display benefit the handling quite a bit.