A bright red box has the bare essentials

The Nokia Lumia 928 comes in a bright red, Verizon branded box. Inside it, you will find a charger, a USB cable, as well as the usual set of booklets.

The retail package won't blow you away

A stereo headset would surely have been a welcome addition to the retail package of the Lumia 928. Sadly, the trend set by the US carriers is to omit headphones as a bundled accessory.

The Nokia Lumia 928 is the first one to break the string of high-end Nokia Lumia smartphones, which feature attractively rounded side edges. The Verizon offering features angular design with a number of sharp edges - it is hardly the best looking Nokia Lumia to date.

The 928 isn't the best looking Lumia around

The Nokia Lumia 928 is only available in a black or white color scheme - gone are the bright colors, which Lumia smartphones are known for. Regardless which color scheme you pick though, the smartphone's front will remain black. This makes the black version look really stealthy, while the white ones almost have dual-color setups.

Build quality is, unsurprisingly, exceptional. The Nokia Lumia 928 body is made from a single piece of polycarbonate with gloss finish. The entire front of the handset is covered in Gorilla Glass 2, so the occasional beating and the daily wear and tear shouldn't be a problem for it.

The measures of the Nokia Lumia 928 are 133 x 68.9 x 10.1 mm, while its weight tips the scale at 162 grams. While the considerable thickness of the handset is easy to forgive, considering the solid camera hardware, we couldn't help but notice that the Lumia 928 with its 4.5" display has the same footprint as a 5" Android flagship.

The 4.5" PureMotionHD+ AMOLED display of the Nokia Lumia 928 is a solid improvement over the IPS unit of the Lumia 920. The deep blacks and infinite contrast ratio of the AMOLED screen make a perfect companion to the Windows Phone 8 UI.

Taking a closer look at the AMOLED display

The screen features a PenTile matrix like most AMOLEDs we've encountered. The display's pixel density of 332ppi however, makes sure that you won't notice the matrix having fewer subpixels than an RGB unit does.

Above the display is where the earpiece, the ambient light, and the proximity sensors reside. The front-facing camera and a set of Nokia and Verizon logos are also to be found above the screen.

The view above the AMOLED display

Below the screen is where the usual trio of capacitive buttons for controlling Windows Phone 8 can be found. The mouthpiece is there too.

No surprises below the screen

Regarding the mouthpiece and earpiece of the Lumia 928, we must point out that both are prone to collecting dust easily. Their functionality is not affected, but it is nevertheless irritating.

There's nothing on the left side of the Nokia Lumia 928. The power/lock key, the volume rocker, and the dedicated camera button are all located on the right. They have the same finish as the Lumia's polycarbonate body.

The back of the Nokia Lumia 928 is where the great-looking loudspeaker grille and the entire camera tech reside. The presence of the dual LED/Xenon flash and a dedicated microphone for noise cancelling during video recording speak plenty about the snapper's serious intentions.

A close look at the back of the smartphone

The heavily touted loudspeaker performance of the Nokia Lumia 928 was very good, considering its non-stereo nature. Sound is loud and clear, though far from what the HTC One has to offer.

The Nokia Lumia 928 sports the same 2,000mAh battery as the Lumia 920. The newcomer achieved an endurance rating of 41 in our battery test. 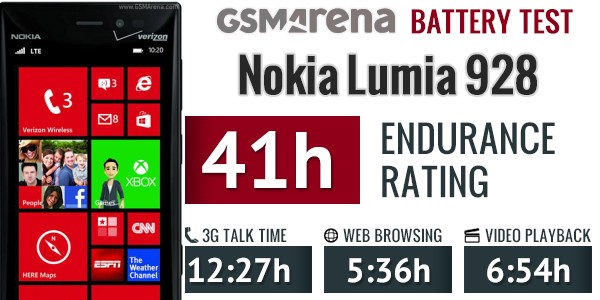 Handling the Nokia Lumia 928 feels slightly awkward. The high-gloss polycarbonate is kinda slippery, so accidental drops are not unlikely. The tapered edges of the device, combined with the large bezel make holding it in one hand slightly uncomfortable, too.

Handling the Nokia Lumia 928 is a bit awkward

Overall, we'd give the Nokia Lumia 928 high marks for its build quality. The design and ergonomics of the handset are far from perfect though. Nokia and Verizon have obviously tried really hard to differentiate the Lumia 928 from the rest of manufacturer's range. We are not sure however, that the end result is worthy of the high-end stature, which the Nokia Lumia 928 possesses.