Everyone thought that Nokia will announce the Lumia 928 at the May 14 event – well, it won't, the official announcement just occured. The phone is exclusive to Verizon and as expected is a beefed up version of the Lumia 920. 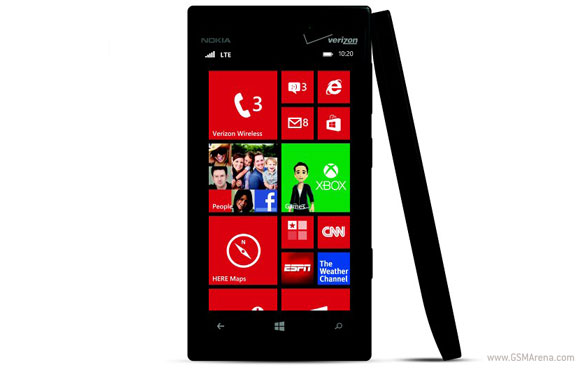 The Nokia Lumia 928 packs an 8.7MP image sensor that is optically stabilized and sits behind a 26mm wide-angle Carl Zeiss lens with F/2.0 aperture. Unlike the 920, the new model packs Xenon flash alongside the standard LED flash. It's quite impressive, considering that the Lumia 928 is just 0.5mm thicker than the Lumia 920.

The Nokia Lumia 928 can capture 1080p video at 30fps and record sounds as loud as 140dB thanks to its HAAC wide dynamic range microphones.

The screen is different too – it's still 4.5" in diagonal with 768 x 1,280 pixels resolution, but it's an AMOLED display with ClearBlack and a High Brightness mode for up to 500 nits of brightness. It's still super sensitive and works with fingernails and gloves.

On the connectivity side there's Verizon's fast 4G LTE along with dual-band Wi-Fi a/b/g/n, Bluetooth 4.0 and NFC. The phone supports wireless charging too.

The Nokia Lumia 928 will be available May 16 from Verizon for $100 after a $50 mail-in rebate on a 2-year contract. For a limited time you'll also get a $25 voucher for the Windows Marketplace. There will be two color versions at launch – Black and White.

I know them both my friend, and i don't know them from pictures, i know them from keeping my hands on them. And not because i ever owned any of them, but because i like technology so much that i always visit stores that have pc's or new released mobi...

yes samsung makes cheap plastic phones i agree but with that they give features even they are copied they are giving all in 1 what nokia is giving? build quality? u gonna taste that? camera? u gonna race them up against DSLR ? Heavy ...