Nokia Lumia 929 leaks in a live photo, this time dressed in white

After taking a break for a few weeks, the previously leaked Nokia Lumia 929 for Verizon appeared in live photos yet again. This time around, the yet to be announced Windows Phone powerhouse showed up dressed in white attire. 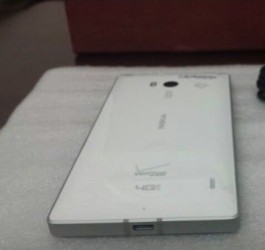 Alongside the leaked photo, alleged information on the battery of the Nokia Lumia 929 made the rounds. The device will reportedly hit the shelves with a 2,510mAh unit on board.

The previously rumored specs of the Nokia Lumia 929 include a Qualcomm Snapdragon 800 SoC, 5” 1080p display, and 20MP PureView camera (we’ve seen an alleged sample from it already). The handset will have 2GB of RAM, and 32GB of built-in memory to go with a microSD card slot.

The latest report suggests that the Nokia Lumia 929 will launch on Verizon in the second half of December. Previous rumors about November unveiling have obviously failed to materialize.

hello der, Until now, Nokia is the best designer and model, this Nokia 929 please silver brown Golding F-M Radio? and the Android system.

Contrary to your article, most rumors point to no microSD for the unannounced Nokia Lumia 929. Please confirm if there will or will not be a microSD slot.

hello der, F-M Radio ? silver brown Golding colors. but if it was Android this beautiful model, then wonderful.