We just dug out a photo of a Nokia-branded MeeGo tablet, along with some specs. Packing telephony and a landscape-oriented interface we are not sure what to make of the device, but it might just turn out to be the hotly anticipated Nokia N9.

The device pictured is obviously a really early prototype as most of its hardware is not working and there is none of the Nokia custom UI to be seen on it. Yet we did get some hardware specs so it's not all bad.

Packing a 4.5" screen the Nokia MeeGo half-tablet-half-phone will be supporting 3G with HSDPA, Wi-Fi and Bluetooth. A microUSB port isn't mentioned but it's now mandatory for all devices sold in the EU so we'll assume it's present too. 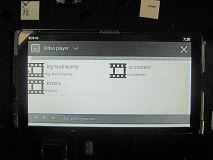 An accelerometer is onboard, along a gyroscope. Camera is also present, though we cannot confirm its resolution. If this really turns out to be the Nokia N9 and previous rumors are to be trusted we might get to see the N8 top-quality on this one.

Of course, there's always the chance that this is just a reference design for engineering needs and we are getting all too excited without a valid reason.

What's making us rather suspicious is the mouse pointer visible on the screen. However the leaked list of current bugs does include a failure to operate the device through the touchscreen and MeeGo supports mouse input so it could just be a Bluetooth accessory.

There’s also another theory, coming from Eldar Murtazin’s Twitter account. According to the editor-in-chief of Mobile-review.com, the N9 has been given the axe and Nokia chose to develop another device instead. If that’s true, it explains why the styling of the device above is so unlike those early N9 shots we've all seen.

Update 25 Dec: We are afraid we've got some bad news for you - apparently the device pictured is nothing else but the Ericsson U8500 reference platform. Now move along, there's nothing to see here.

Here's hoping there's a MeeGo smartphone announcement coming next month, so we could finally stop with all the guessing.

Hi Frinds Do you knwo the best mobile ?

HOLY MOLY!!! I just looked up the Nokia Morph and whenever that drops (With a future Meego OS obviously), I will be preordering mine. That phone shows the possibilities of the Future of Meego and Cell Phones. Nice Find Chester.

that's why i wanna buy a nice Meego phone from Nokia,they'll release lot's of MeeGo phones and other devices running MeeGo i just hope they release this n9 and many say it's the most beautiful phone excluding the Nokia Morph. Of course if u...