Nokia's online stores are shutting their virtual doors - stores in France, Spain and the Netherlands were the first to go, and now the rumor is that the Nokia UK store hasn't got much time left in this world either.

A Nokia Spain representative explained the closing of the Spanish online store at the end of May was due to too much competition from carriers, which subsidize the phones they're selling. The representative assured that the regional Nokia sites will continue to provide support for Nokia owners.

A Nokia affiliate received a notification that the Nokia UK online store will be closing at the end of this month. There's no official confirmation of that yet, but it sounds credible since this isn't the first store to close down. 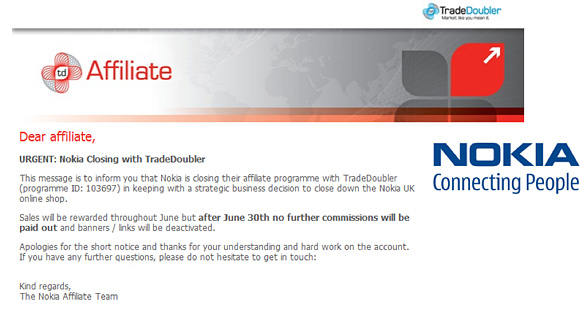 It's not clear how these closures will affect Nokia - even if people prefer to buy subsidized Nokia phones from carriers rather than from Nokia itself, they're still buying Nokias. But the profit margin might be different - and it's not like Nokia is in a good position to be lowering its profits even more.

For goodness sake, will you all stop squabbling and bickering over who has got the best phone/processor/OS/camera/GPS/etc. Love them or hate them, Nokia are still a world leader and pioneer; this ain't gonna disappear. Other brands have come along wi...

hahaha so what do you call that?

USB OTG what for? Show me an application where USB OTG is a benefit? SGS is already a large storage space with an SD card slot in case you ever use up any of the built in storage. Free offline navigation is coming to Android, Android supports offline...