Nokia has pinpointed the date for its Mobile World Congress 2014 press event. You can mark your calendars for Monday, February 24 when the event will start at 8:30AM (7:30AM GMT).

Reading "Meet us under the tree," the press invite carefully keeps Nokia's cards close to its chest and doesn't reveal anything. It's possible for the company to be having a word play with "tree" standing for three smartphones. 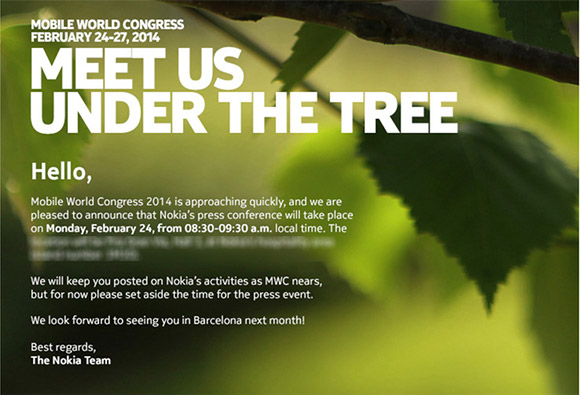 The mini Lumia 1520V is also said to pack a 14MP camera at the back with a 3,000mAh battery capable of wireless charging. Moreover, it's believed to debut the Windows Phone 8.1 operating system, but for now those remain unfounded rumors.

Onto the Nokia Lumia 1820, which is expected to feature the latest Snapdragon 805 chipset with 3GB of RAM and a 5.2" display of 2K resolution. The juicy configuration is going to draw power from a 3,400mAh battery. The internal storage is going to be 32GB with no microSD card to be making its way to the rumored phone just yet.

The rumor mill reckons the Lumia 1525 phablet is going to be the third phone of the family that'll make it to MWC 2014. At this point, there aren't much rumors to paint a picture for it, but it's believed to be a 6" phablet.

Lastly, there's the highly anticipated Android smartphone from Nokia codenamed Normandy. It's been leaking extensively with live photos and UI screenshots, but nobody knows if Nokia will unveil it at MWC 2014. The Mobile World Congress saw Nokia make a bang in 2012 with the 808 PureView cameraphone, so why not shock the world again in 2014 with an Android phone?

The Nokia Normandy is said to run Android 4.4.1 KitKat and pack a 854 x 540 resolution display. It's also hinted by the leaked UI screenshots to boast dual-SIM functionality.

You can bet we'll be there to cover everything that Nokia has to offer in Barcelona this February. Tune in for extensive coverage from the MWC 2014 showroom floor next month!

Nokia have nice display, but for new generation needs make reforms, changes classic AMOLED for "Super AMOLED Plus". And for peoples how likes masterpice display have it, can be reached only if the unite Super AMOLED Plus with ClearBlack dis...