We just stumbled upon photos of a new Nokia smartphone. The device dubbed to be the Nokia N8's successor, is said to be called N8-01 (though, considering Nokia's new naming policy the Nokia 801 seems more likely) and features a qHD screen.

The images come from this Nokia 700 hands-on video, courtesy of the Greeks from Techblog. While testing the Belle-running 700 video player, the review runs a video, which features the unannounced smartphone with an edge-to-edge curved screen. 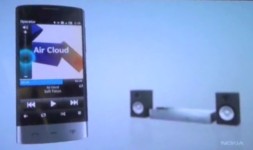 You may check out the video itself below. The Nokia 801 makes an appearance at 2:20 minutes in.

The Nokia 801 is another Symbian device that, if the N8 successor guesses are true, should pack one hell of a camera. Will we see it go live at this year's Nokia world?

i have seen this device in nfc demo video on my 603. N whatever the truth may be, i just loved the design of said handset.. Its beautyful...

what is exact release date for it?

Pre-orders for Wuling's first global car are open, it's a small city car This trailer can apparently extend the range of Hyundai Ioniq 5Mercedes EQT Marco Polo is a small electric camper with 280 km range
ADVERTISEMENTS