Nokia N86 8MP gets an update, now has face detection

Nokia has released another update that improves the camera performance of its imaging flagship - the Nokia N86 8MP. The key addition in this one is face detection, but there's also a general improvement of still image and video quality plus other updates and bugfixes. 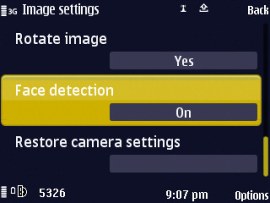 The previous major update for the N86 8MP was 11.043, which improved quality in videos and low-light shots. The new update builds on that, adding red-eye removal, a new focus point indication and improved macro shots.

With this new update, Nokia N86 8MP also gets bugfixes to Ovi Maps, the browser, Nokia Messaging, Music store client, Here and Now (which is still in beta), N-Gage and the RealPlayer.

The update also adds an Ovi Store client (which reportedly is still buggy) and does some tweaking that should improve performance. Interestingly it seems like Nokia did some spring-cleaning - the update also frees up some memory both in storage and in RAM - C: now has 70MB free and RAM has 65MB free on system boot. As for the update itself - it's about 8MB big and preserves user data. The new (20.115) update is available over the air or through Nokia Software Update.

anyone can give me any adress to download firmware free plzzz

Does anyone know if this update has any improvements for the bluetooth stability? My N86 seems to lock up when using the bluetooth with my GPS for handsfree calls every once in awhile. I have to shut the phone down and restart it to reconnect the t...