Nokia N8 gets lots of stick in early reviews, we wonder why

The Nokia N8 started shipping this week and reviews of the Finnish company's latest flagship are spreading like wildfire. Checking out the first batch of those we noticed a certain trend, which we cannot quite explain. It seems that for some reason most of the reviewers don’t give the handset a fair chance and go a bit too far with their criticism.

If you have been keeping track of our review comments section you would know that we are often accused of having an anti-Nokia bias. Well, we don't - we just try to give each phone an equal chance and then call it as we see it. And that is exactly what didn't happen in those early N8 reviews.

To illustrate our point, we'll give you a few examples. Gizmodo made a video, which is supposed to show the level of usability the Nokia N8 offers. Three users (one armed with an N8, one with the iPhone 4 and one with BlackBerry Bold) are asked to perform similar tasks to see which of the handsets lets them do it the fastest.

Now, the thing is the iPhone 4 and Bold users have obviously had their handsets for a while, but the guy with N8 is obviously not perfectly familiar with its interface just yet. There is some hesitation on his side here and there, which we feel affects the result unfairly. Not to mention the slower typing speed, which is at least as much down to the lack of practice as it is to keyboard imperfection.

Also for the second task (mapping directions)q the three phones use completely different applications, which is again, not the fairest of tests for device performance.

Let alone the "take a photo" challenge where the N8 takes more than nine seconds to start its camera. Well, we've played with several N8 units already we never saw one that takes so much time to get into shooting mode. Something's not quite right there.

Next up, it’s Engadget and their Nokia N8 vs iPhone 4 shootout, which also happens to have a rather major flaw that works against the N8. We are talking about the obvious camera shake in several of the Nokia N8 shots. 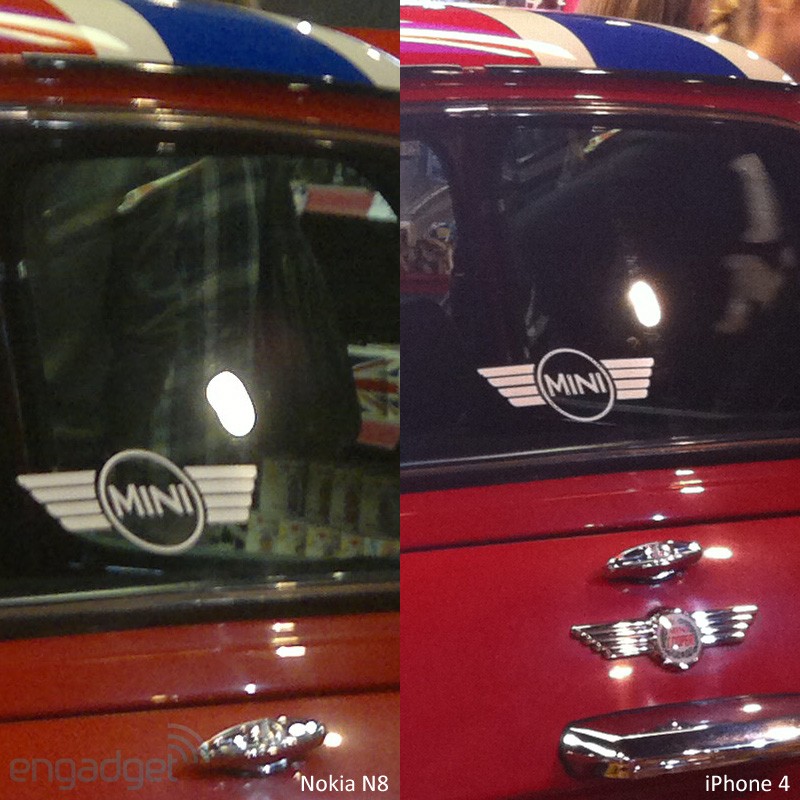 100% crops from the shootout published at Engadget

Camera shake is a natural part of photography but it depends on so many factors outside the handset that we don’t think it has a place in a shootout. The camera shake results in a huge resolution loss for the N8 and renders all conclusions based on those shots pointless.

Finally, we stumbled upon Eldar Murtazin's blog post, comparing the N8 to the Pixon12. The fact that the two cameras used different settings (the N8 always went for a higher ISO setting than the Pixon12) isn't taken into account when judgment is passed, which is not really fair.

We all know about the trouble that the Mobile Review guru has had with Nokia recently. We guess he's in hos right to be mad at the company management, but those things should be put aside when reviewing a handset. Of course, everyone is free to publish anything in their own personal blog but chances are we will be seeing more of the same tomorrow when the full review appears at Mobile-review.com.

We can go on like that but you should have gotten the idea by now. Just to be clear – we don’t have anything against any of those websites. We respect the work of our fellow journalists and appreciate what they do on a daily basis. It’s just that we feel they are not being fair on this particular occasion and the Nokia N8 is much too important product to just let that slip.

We are not trying to play devil’s advocates here and try to convince you that the N8 is perfect. It certainly isn’t without its flaws and those should be criticized. All we are saying is that the device should be given a fair chance and not be punished for the shortcomings of its predecessors or just because the reviewers aren’t having much love for Nokia as a brand.

Or are we the ones in the wrong? Feel free to share your opinion on the matter in the comments section below.

Anyway they was right, phone was already outdated when it came out, symbian never had a chance against ios and Android, only camera was really good

My nokia N8 touch screen is stuck. Phone is not respondind at all, not even switching off. There is constant play on the ringing tone. What must I do?

had my nokia n8 over 12 months now and im v happy with it dont find it slow camera is great and must be good if my son wants it when i have upgrade. always had nokia av tried others but always go back to nokia. also just had belle update on phone gre...