Nokia N8 to hit it off in Spain and UK too, a white Galaxy S as well

Nokia N8 is coming soon. Apparently, the phone will start selling at the end of August in the UK and maybe even sooner in Spain. In the meantime, the Samsung Galaxy S is getting a white paint job.

Who saw that coming? A white color version of the Samsung I9000 Galaxy S! And you thought that a Froyo update would be the only intriguing news involving the Galaxy S that could surface? You'd better think twice. We've just noticed the image of the upcoming device on the website of the Spanish chain store The Phone House. 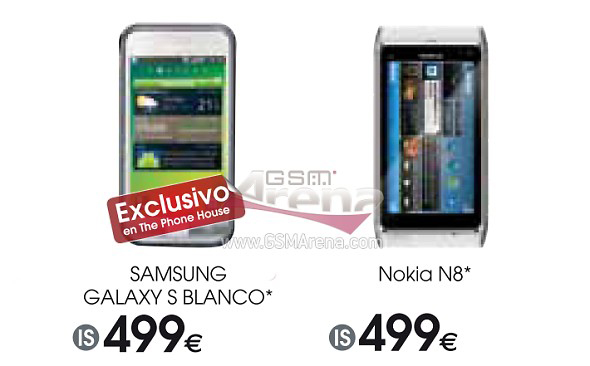 Unfortunately, the photo is too small to get any impression of the phone but according to the company, the device should start selling soon so it is only a matter of time for larger images to appear.

Right next to the white Samsung Galaxy S we found the Nokia N8 (priced at 499 euro, ouch!) which, just like the I9000, will start shipping soon. The last time we heard of the N8 was when it appeared on the Italian website of Nokia for as price of 469 euro. It informed us that the device is about to head for the stores sometime by the end of September but as it turns out now we may see it way sooner.

By the way, Spain isn't the only country that should get the N8 before September. The phone is said to hit it off on 31 August in UK where it will cost even more - 420 GBP (around 505 euro). Double ouch!

So GPRS and EDGE are much faster than any Android phone can offer? What drug are you on?