The long awaited MeeGo device is finally a reality and it turns out it has a brother - the Nokia N950 is a developer's platform running MeeGo and packs a QWERTY keyboard along with similar specs to that of the N9.

The Nokia N950 is likely one of the leaked MeeGo devices that was rumored to be the official MeeGo handset for this year. The N950 is not a consumer device - it comes with no warranty, beta software (which has issues) and overall may not work as well as a day-to-day device (e.g. some drivers are not finalized, apps may crash and so on). 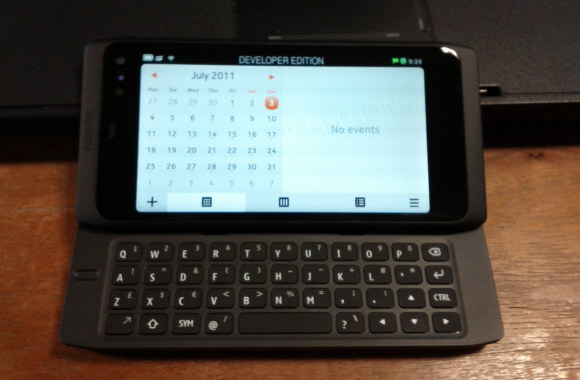 Still, the N950 has an aluminum body, which is always a plus and the slide-out QWERTY keyboard will draw the eye of heavy texters. The screen is a 4" TFT unit with FWVGA resolution (rather than 3.9" FWVGA AMOLED).

The 8MP camera on the Nokia N950 has "very similar image quality" to the Carl Zeiss branded camera on the N9 but the camera units are different. The front facing camera is in a different location but the same module is used for both devices.

Other differences include the lack of NFC module in the N950 and its digital compass isn't as accurate and the battery is slightly smaller (1320mAh vs. 1450mAh).

The software on the Nokia N950 isn't finalized and won't get an Over-the-Air update (but devs can flash it manually). Still, MeeGo is a very flexible platform and we're guessing it won't be long until someone ports the software from the N9 to the N950.

Nokia didn’t specify a release date or price for the N950 model. Still, MeeGo enthusiasts should be ecstatic about this - two MeeGo devices even though Nokia promised only one.

people do use them, I am a die hard physical slide out, will never go to a pure touch screen, so much easier, short cuts, etc... Keep them rolling out pls nokia because they are starting to run low

I am a heavy texter so I need a physical,qwerty keyboard,a quick processor and lots of memory.Also because of health/fitness apps I use,I need a phone with 32GB to 64GB. My 9800's 624 processor is too slow.The i4S has great apps but only an on screen...

Agreed about we dont need dual core phones yet, but we (nokia fans) still need: as the first and most important fail that Nookia has since its creation 1) A BIGGER BATTERY OMG !!! 2) better screen resolution, 3) lot of RAM (accomplished this time) 4)...